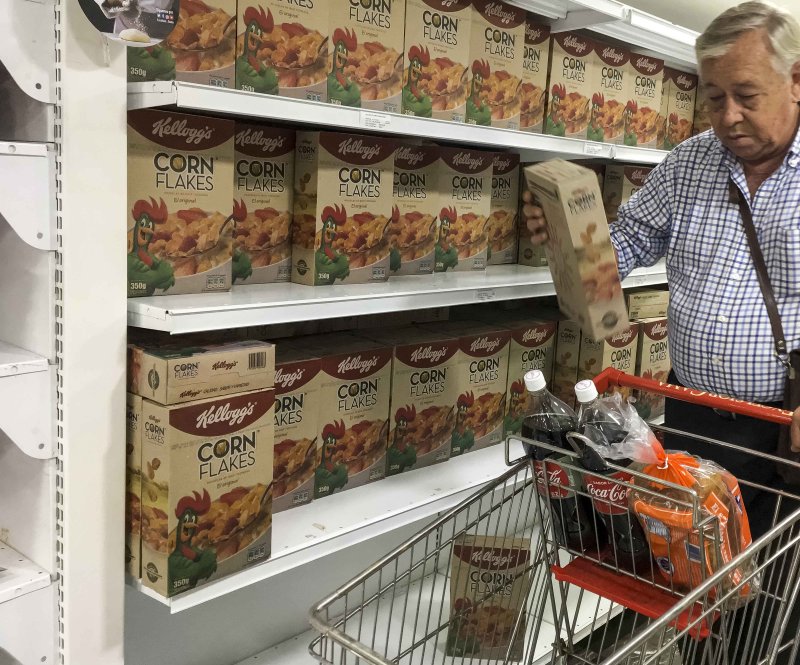 A customer picks ups a cereal box from the Kellogg brand in a supermarket in Caracas, Venezuela, on Tuesday. Photo by Miguel Gutierrez/EPA-EFE

May 16 (UPI) -- Workers in Venezuela seized a Kellogg's factory after the U.S. company said it would leave the country over its worsening economic conditions.

Workers who arrived Tuesday at the company's plant in the central Venezuelan city of Maracay found a statement from Kellogg's saying it closed operations there. Venezuela's Labor Minister Néstor Ovalles came to the plant and told workers the state would "ensure their rights and employment," the Wall Street Journal reported.

"We've begun judicial proceedings against the business leaders of Kellogg's because their exit is unconstitutional," Maduro told supporters in the central state of Carabobo, according to the BBC. Maduro added that Venezuelans seized the factory so it could continue producing goods.

"I've taken the decision to deliver the company to the workers in order that they can continue producing for the people," he said.

Kellogg's cautioned against selling its products "without the expressed authorization of the Kellogg Company."

In assigning blame for shutting down its Venezuela operations after 56 years, the Michigan-based company cited "a material change in the entrepreneurial environment, including a turn for the worse in our access to key materials as consequence of the present restrictions."

"The current economic and social deterioration in the country has now prompted the company to discontinue operations," the company said.

World News // 1 hour ago
Egypt's most famous Giza pyramid lit up with tribute, safety messages
March 31 (UPI) -- Egypt's most famous pyramid is being used to relay important messages to residents near Cairo about the coronavirus outbreak.

World News // 3 hours ago
Syrian forces retake control of prison after inmates riot
March 31 (UPI) -- The Syrian Democratic Forces said it's regained control at a prison that was partly commandeered by inmates belonging to the Islamic State terror group.

World News // 7 hours ago
Former Congo leader Joachim Yhombi-Opango dies of coronavirus
March 31 (UPI) -- Jacques Joaquim Yhombi-Opango, the former president of the Republic of the Congo, has died from complications related to the coronavirus disease, his family said. He was 81.

World News // 9 hours ago
Coronavirus outbreak deepens worldwide as China's industry rebounds
March 31 (UPI) -- China on Tuesday announced its manufacturing sector was recovering after its markets took a steep hit due to the coronavirus outbreak while countries the world over were tightening quarantine restrictions.