Seoul and Pyongyang officials will discuss the installation of the direct line during their working-level talks on Saturday at the northern side of Panmunjom truce village, JoongAng Ilbo reported.

The two sides had agreed to establish a line between their leaders to hold consultations and reduce military tensions and to hold their first phone conversation before their summit on April 27.

A Seoul presidential official explained that a communication line that currently runs through Panmunjom would be extended to Moon's office to establish the hotline.

The official added that Seoul may install a separate telephone for the cross-border line "for the sake of symbolic significance."

Prior to Saturday's talks, Seoul and Pyongyang are set to hold working-level discussions to prepare for their leaders' meeting.

The North also notified Seoul that it will send a six-member delegation to the talks where the two sides will discuss protocol, security and media coverage of the summit.

The ministry said Seoul will accept the North's proposal, adding that the South Korean government will make thorough preparations to ensure the summit is held successfully. 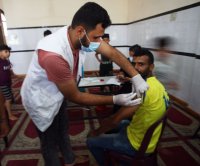