A state funeral will be held in South Africa next week for Winnie Madikizela-Mandela, the former wife of civil rights icon Nelson Mandela. File Photo by Matt Mendelsohn/UPI | License Photo

April 3 (UPI) -- A state funeral is being planned in South Africa for Winnie Madikizela-Mandela, the former wife of civil rights icon Nelson Mandela.

Madikizela-Mandela died Monday in Johannesburg's Milpark Hospital, where she was being treated for a kidney infection. She was 81.

South Africa President Cyril Ramaphosa, speaking outside of Madikizela-Mandela's home, confirmed an official memorial is set for April 11 and a "national official funeral" for April 14.

Madikizela-Mandela had been receiving treatment for a kidney infection before her death.

The former wife of Nelson Mandela became an icon of the apartheid struggle in South Africa, and later became its first lady after her husband was elected leader following his release from prison.

Madikizela-Mandela was later elected to South Africa's parliament and campaigned for the release of her ex-husband while he was imprisoned over treason charges. She was also banished and imprisoned in solitary confinement for 18 months.

"In the coming days, as we mourn the passing of this heroine of our struggle, let us reflect on her rich, remarkable and meaningful life," Ramaphosa said. "Let us draw inspiration from the struggles that she fought and the dream of a better society to which she dedicated her life." 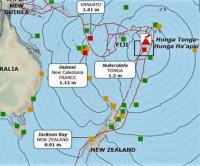 World News // 1 hour ago
Distress beacon from islands near Tonga eruption site detected
Jan. 17 (UPI) -- A distress signal emanating from a pair of isolated, low-lying islands near Tonga has been detected in the wake of this weekend's undersea volcano eruption, United Nations officials said Monday.

World News // 8 hours ago
China decides not to sell tickets to public for Winter Olympics in Beijing
Jan. 17 (UPI) -- The Beijing Winter Olympics Organizing Committee announced Monday that tickets will not be sold to the public but will be distributed "exclusively" to residents of the country who meet strict COVID-19 requirements.