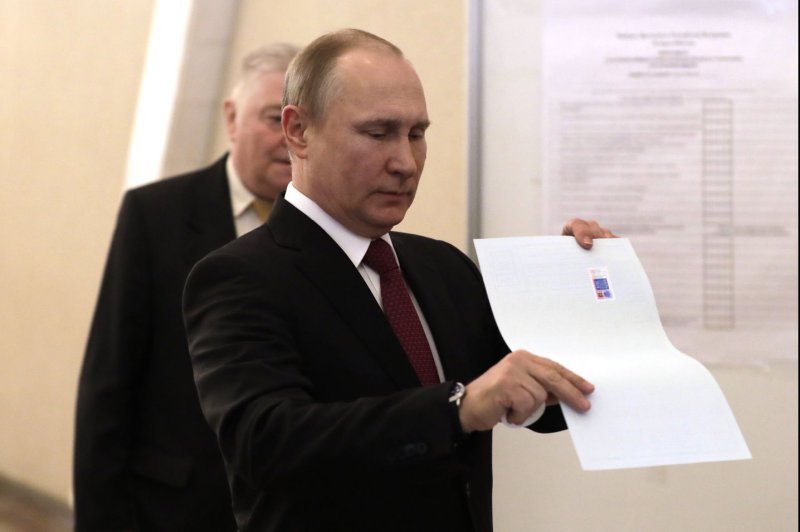 Russian President holds his ballot at a polling station during the presidential election in Moscow on Sunday. Photo by Yuri Gripas/UPI. | License Photo

The only uncertainty was how many voters will turn out and Putin's victory margin for his fourth term.

Putin won 73.9 percent of vote, according to state-run pollster VTsIOM.

Among his seven challengers, the Communist Party's Pavel Grudinin won 11.2 percent of the votes and Vladimir Zhirinovsky of the Nationalist Liberal Democratic Party came in third with 6.7 percent. Liberal Ksenia Sobchak, the daughter of Putin's political mentor and a TV personality, had 2.5 percent.

In 2012, the turnout was 65 percent with Putin receiving more than 63 percent of the votes.

The commission said with 21 percent of all precincts counted, all from Russian's Far East, Putin was leading the race with 71.9 percent of the vote. Because of the time zone different, voting began Saturday night in the Far East region.

RELATED Russia to 'crank up pressure' on Britain, U.S. over sanctions

"It's a key issue of how much he can genuinely claim that he has the support of the Russian people and how much he has to fiddle, tweak and manipulate," James Nixey, head of the Russia and Eurasia Program at Chatham House, a London-based international affairs think-tank, told NBC.

The Central Election Commission allocated more than $13 million to publicize the election.

In a change, people can vote at any polling station.

The Kremlin was relying on millions of budzhetniki: workers from state factories, army and schoolteachers who receive their salaries from the government.

In Moscow, voters received a free bowl of steaming buckwheat.

Alexei Navalny, an outspoken Putin critic who was barred from running for president himself, called on his supporters to boycott the vote.

Close to 109 people were registered to cast ballots at 100,000 voting stations across the 85 regions and republics of the Russian Federation. Also, Russian citizens will also be able to cast their ballots in 145 countries, including Israel.

The Central Election Commission said it was being targeted by a cyberattack.

"We are registering what is in fact a cyberattack on our information center," the commission's secretary, Maya Grishina, said in a report by RT.

Civic Chamber's website observing the election at one time was down and commission's website was also attacked soon after voting began.

Putin, who has been accused of interfering with the U.S. presidential election in 2016, voted at a polling station in central Moscow on a bitterly cold but sunny morning.

"What percentage of the vote would you consider for yourself successful?" a journalist asked Putin in a sign of the day's major drama. Putin hesitated for a moment, then said: "Any amount of votes that gives me the right to perform the role of the president."

If Putin, 65, serves his full term until 2024, he will be the first Kremlin leader to be in power two decades since Joseph Stalin.

Putin rose to power in 2000 as President Boris Yeltsin's replacement. Because of term limits, he became prime minister in 2008 and returned as president in 2012.

World News // 6 hours ago
Anti-oil protesters glue selves to 'Last Supper' painting at Royal Academy
July 5 (UPI) -- For the second day in a row a group of climate activists glued themselves to a painting at a London art museum Tuesday to protest oil and gas extraction.

World News // 6 hours ago
Hacker allegedly selling data of 1 billion people stolen from Shanghai police
July 5 (UPI) -- An anonymous hacker is selling what appears to be a massive trove of data pilfered from the Shanghai police that could include personal information from 1 billion Chinese nationals, according to reports.

World News // 7 hours ago
Germany fears for gas supply as Russia to shut down Nord Stream pipeline
July 5 (UPI) -- Russia is planning to shut down the Nord Stream 1 pipeline next week for annual maintenance, stoking fears in Germany that gas supplies could be severely impacted.

World News // 9 hours ago
Yum! Brands close to Russian exit with KFC sale almost complete
July 5 (UPI) -- Yum! Brands announced it is close to finalizing the sale of its Russian KFC franchises to a local operator. The KFC and earlier Pizza Hut sales would complete Yum's exit from Russia since its February invasion of Ukraine
Advertisement