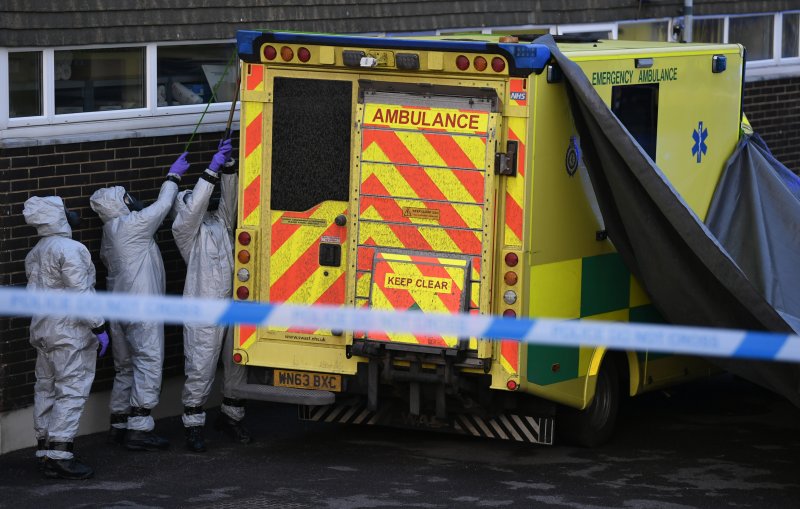 Russian ambassador to the European Union Vladimir Chizhov suggested the nerve agent used to poison former spy Sergei Skripal and his daughter Yulia Skripal may have come from a British laboratory. Photo by Neil Hall/EPA

March 18 (UPI) -- Russia's ambassador to the European Union suggested Sunday the nerve agent used in the attack on a former spy and his daughter came from a British research laboratory.

Appearing on the BBC's Andrew Marr Show Vladimir Chizhov noted the British military research base Porton Down lab -- which identified the toxin as part of a group of military-grade nerve agents known as Novichok developed by the Soviet Union -- is miles away from where the attack took place.

"When you have a nerve agent or whatever, you check it against certain samples that you retain in your laboratories," he said. "And Porton Down, as we now all know, is the largest military facility in the United Kingdom that has been dealing with chemical weapons research. And it's actually only 8 miles from Salisbury."

While his comments suggested the nerve agent may have come from the base, Chizhov added he didn't have "any evidence" that the lab was responsible for the toxin used in the attack, which hospitalized former spy Sergei Skripal and his daughter Yulia Skripal.

RELATED Russia to 'crank up pressure' on Britain, U.S. over sanctions

"It's just another futile attempt from the Russian state to divert the story away from the facts -- that Russia has acted in flagrant breach of its international obligations," a foreign office representative said.

The United States, Britain, France and Germany jointly blamed the Russian government for the poisoning stating "there is no plausible alternative explanation" to the attack -- which was supposedly the first offensive use of a nerve agent in Europe since World War II.

Chizhov said Russia didn't maintain a reserve of Novichok and had "nothing to do" with the poisoning.

"I exclude the possibility of any stockpiles of any chemical weapons fleeing Russia after the collapse of the Soviet Union, but there were certain specialists, including some scientists who today claim to be responsible for creating some nerve agents, that have been whisked out of Russia and are currently residing in the United Kingdom," Chizhiv said.

He added while Skripal could "rightly be referred to as a traitor" in Russia, the country "had nothing against him" from a legal standing.

RELATED May says it's 'highly likely' Russia was behind spy poisoning

Chizhov's comments come after British Prime Minister Theresa May dismissed 23 Russian diplomats Wednesday in response to what she called a "direct act by the Russian state."

Russia responded Saturday by expelling 23 British diplomats and threatening further measures would be taken if the Britain government retaliates against Russia again.

World News // 19 hours ago
Greta Thunberg, activists in 70 nations call for urgent action against climate change
Sept. 24 (UPI) -- Fridays for Future, an environmental movement for action to fight climate change, organized rallies in dozens of countries on Friday in the first mass event for the cause since the COVID-19 pandemic began.

World News // 19 hours ago
Lava from La Palma eruption has burned almost 400 structures so far
Sept. 24 (UPI) -- Slow-moving lava from a volcano on La Palma in the Canary Islands has so far destroyed close to 400 structures this week and 500 acres, authorities said in an update Friday.