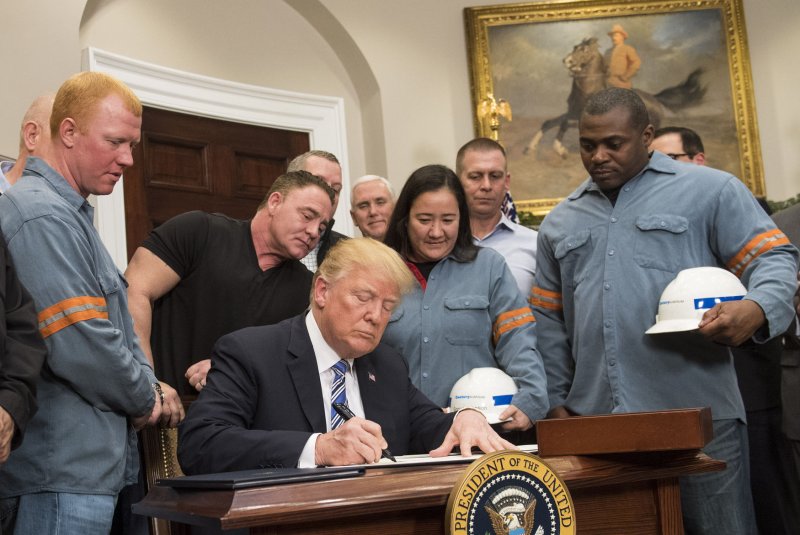 President Donald J. Trump signs a proclamation applying tariffs to steel and aluminum imports, as he is joined by steel and aluminum makers in the Roosevelt Room at the White House in Washington, D.C. on March 8, 2018. Photo by Kevin Dietsch/UPI | License Photo

March 16 (UPI) -- The European Union has released a long hit list of American exports it could target should President Donald Trump succeed in levying import tariffs on steel and aluminum.

The 10-page list includes hundreds of products imported from the United States to the EU, including cigarettes, whiskey, corn, yachts and kitchen furniture.

Though China produces and exports the majority of the world's steel, 10 percent of the steel imported by the United States -- the world's largest steel importer -- is produced by EU member nations. European officials are concerned American steel tariffs could drive down the price of steel and cost thousands of workers their jobs.

Europe has threatened a trade war should Trump and the United States proceed with efforts to impose tariffs on imported steel.

EU officials say their retaliation would be two-pronged, with a first round of tariffs on American imports imposed as soon as the first steel tariffs are imposed by the United States. A second round of tariffs on a different group of products would be triggered should the World Trade Organization approve Trump's metal tariffs.

Trump has his own retaliations planned. Should the EU initiate new tariffs, Trump has threatened to impose new taxes on vehicles imported to the U.S. by European carmakers.

European leaders say a trade war could be avoided by offering the EU an exemption from any new metal tariffs. Trump is expected to offer exemptions to Canada, Mexico and Australia.