March 7 (UPI) -- The Louvre became the first Western museum to open a major art show in Iran -- bringing in some 50 masterpieces.

French Foreign Minister Jean-Yves Le Drian and Vice President of Iran Head of Cultural Heritage Ali Asghar Mounesan, opened the exhibition in Tehran, coinciding with the 80th anniversary of the National Museum in the nation's capital.

Among the items on loan are a 2,400-year-old Egyptian sphinx, a bust of Roman Emperor Marcus Aurelius and drawings by Rembrandt and Delacroix. Two of the artifacts are Iranian -- a bronze ax from the ancient city of Chogha Zanbil and a flag from Lurestan, a province in western Iran.

The exhibit, which was decided in January 2016 during Iranian President Hasan Rouhani's trip to France, parallels with an Iran exhibition the Louvre is presenting in Paris: "The Rose Garden: Masterpieces of Persian Art from the 19th Century," the Louvre said in a statement.

The Louvre called the exhibit in Iran an "outstanding cultural and diplomatic event for both countries" adding that the exhibit would "testify to the universality of the creative spirit."

"In the turbulent ocean of international diplomacy, cultural diplomacy is a beacon we must keep alight," Le Drian said.

Before the art show opening, Iranian Foreign Minister Mohammad Javad Zarif asked Le Drian to stick with the landmark 2015 nuclear deal, despite pressure from the United States to change or end the Obama-era pact.

The deal, which lifts Iranian sanctions in exchange for limits on Tehran's nuclear program, was struck by Iran and six others -- the United States, Britain, Russia, France, China and Germany.

U.S. President Donald Trump has repeatedly accused Iran of committing "multiple violations" and asked Congress to address the "many serious flaws" of the deal.

However, European officials have said the Iranians are in full compliance with the terms of the Joint Comprehensive Plan of Action and Iran has denied wrongdoing. 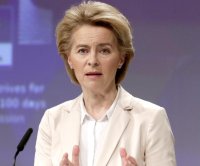