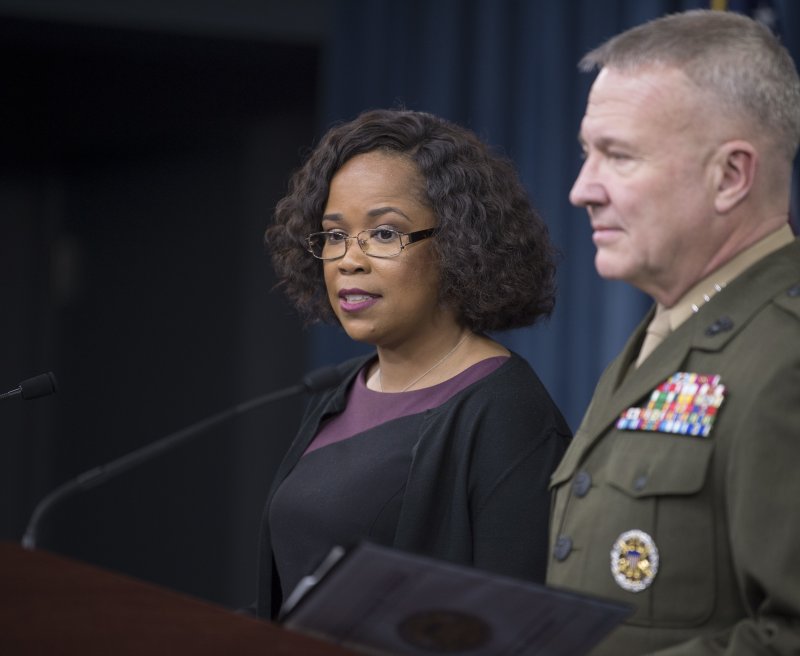 Dana White, the assistant to the secretary of defense for public affairs, and Lt. Gen. Kenneth F. McKenzie, the Joint Chiefs of Staff director, brief the press at the Pentagon in Washington, D.C., on Thursday. Photo by Kathryn E. Holm/U.S. Navy

WASHINGTON -- Two Pentagon officials said Thursday that current military operations in Syria by the Turkish government are a "distraction" that is impeding the overall goals of the U.S.-led coalition in the region.

Lt. Gen. Kenneth McKenzie, director of the Joint Chief of Staffs, said during a briefing that Turkey's recent action has become concerning for the coalition because it moves focus away from the goal of defeating the Islamic State in Syria.

"It is not helpful to have these operations go on," McKenzie said. "We recognize that, and we are working with the Turks to try to minimize it."

McKenzie said the United States was made aware of the attacks ahead of time and that Turkey has legitimate security concerns; it is the only NATO country to have an open insurgency in its borders.

RELATED Why no one is winning the war in Syria

McKenzie and Pentagon spokesman Dana White said multiple times throughout the briefing that any distractions from defeating the Islamic State is not helpful to the efforts of the U.S.-led coalition operating in Iraq and Syria.

"We ask that Turkey de-escalate," White said, adding that the militant group is a common threat for both Turkey and the United States.

Tensions between both countries escalated throughout the week, prompting leaders to speak with each other Wednesday.

According to a White House statement, President Donald Trump and Turkish President Recep Tayyip Erdogan spoke about the conflicts in Syria.

"[Trump] urged Turkey to de-escalate, limit its military actions, and avoid civilian casualties and increases to displaced persons and refugees," the statement said.

The Turkish government began military operations against Kurdish militias in Afrin, Syria, on Saturday. The attacks along the Turkish-Syrian border have created questions about a conflict of interest within the region for the United States.

The United States has backed Kurdish forces and used Kurdish fighters in its campaign against the Islamic State in the country, but Turkey is a NATO ally in an unstable region.

The Syrian Democratic Forces, a U.S.-backed Kurdish militia force, were a large part of the retaking of Raqqa -- the once-self-proclaimed capital of the Islamic State.

When the total liberation of the city was announced in November by the coalition, special operations commander Maj. Gen. James Jarrard praised the SDF and said 400 SDF fighters were killed and more than 900 were injured in the retaking of the city.

Advertisement
RELATED U.S. must not abandon the Kurds

The Turkish military operations in Afrin came less than a week after Secretary of State Rex Tillerson stressed the importance of Turkey's role in helping to stabilize the country.

"We must have Turkey's close cooperation in achieving a new future for Syria that ensures security for Syria's neighbors," Tillerson said while speaking about the United States' intentions to remain in Syria until the threat of the Islamic State or a re-emerging al-Qaida is no longer there.

This is not the first time in recent months that the Pentagon has expressed concern over regional conflicts distracting the coalition in its fight against the terror group.

In October, when fighting began in Kirkuk between Iraqi forces and Kurdish forces, a military leader from the coalition and Pentagon officials expressed concern that it would lead to a lack of focus in fighting the Islamic State.

The U.S.-led coalition has been operating in Iraq and Syria since October 2014. After nearly four years of operations the coalition says 98 percent of territory once held by the Islamic State has been liberated.

According to the Pentagon, there are around 2,000 U.S. soldiers still in the country. And, White said on Thursday, the United States is training internal security forces in Syria to help protect recently liberated land in Syria.

World News // 5 hours ago
Storm Barra crashes into Ireland, Britain with deadly force
The second named windstorm in less than two weeks reached bomb cyclone status prior to striking portions of Ireland and Britain with a fury Tuesday into Wednesday.

World News // 13 hours ago
Biden says he isn't considering sending U.S. troops to Ukraine
Dec. 8 (UPI) -- President Joe Biden said Wednesday that sending troops to Ukraine is "not on the table" after his high-stakes virtual summit with President Vladimir Putin on Tuesday.

World News // 18 hours ago
'Zombie fires' burn despite temperatures plunging to 74 degrees below zero
Bone-chilling conditions are being reported across parts of Siberia, which has been experiencing some of the coldest air on Earth in recent days. Yet "zombie fires" continue to burn beneath the frozen landscape.