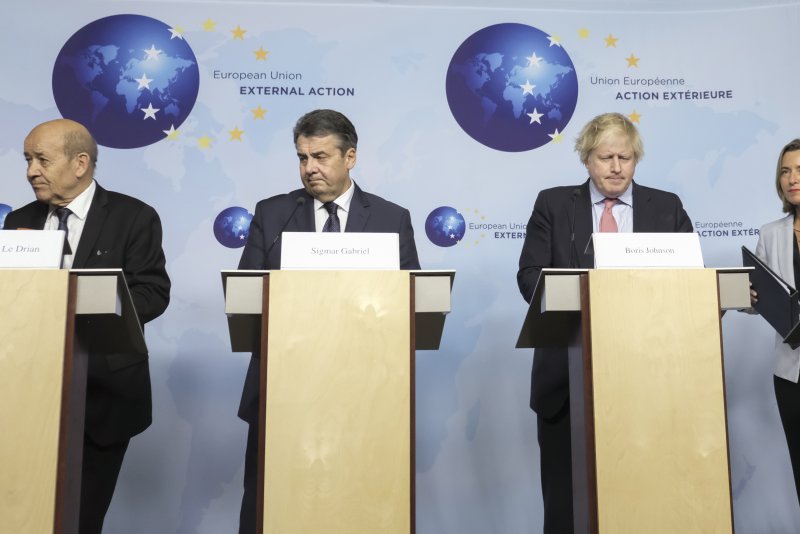 Jan. 11 (UPI) -- European leaders on Thursday encouraged U.S. President Donald Trump not to dismiss the Iran nuclear deal, but instead show that there is a better alternative.

At a meeting in Belgium attended by Iranian Foreign Minister Javad Zarif and the foreign ministers of Britain, France and Germany, the European leaders agreed that Iran had respected the terms of the landmark deal, which was signed in 2015.

Federica Mogherini, the European Union's top diplomat, said the deal "made the world safer and prevented a potential nuclear arms race in the region."

Mogherini also said any doubts over Iran's development of ballistic missiles or interference across the Middle East was separate from the nuclear deal itself.

"We want to protect the Joint Comprehensive Plan of Action against every possible undermining decision whatever that may come," Sigmar Gabriel, Germany's foreign minister, said. "It would send a very dangerous signal to the rest of the world if the only agreement that prevents the proliferation of nuclear weapons was negatively effected."

French Foreign Minister Jean Yves Le Drian agreed, saying, "There is no indication today that could call into doubt Iranian respect of the agreement."

British Foreign Secretary Boris Johnson challenged Trump, a frequent critic of the pact, to come up with a better alternative -- stressing that Iran was in full compliance with the terms of the agreement.

"I don't think that anybody has produced a better alternative to the JCPOA as a way of preventing the Iranians from going ahead with the acquisition of a military nuclear capability," Johnson said. "It is incumbent on those who oppose the JCPOA to come up with that better solution, because we have not seen it so far."

Trump has accused Iran of committing "multiple violations" and promised to work with Congress to address the deal's "many serious flaws."

Iran has insisted they have complied with the deal, with Zarif tweeting that the EU is "fully aware" of the country's compliance.

RELATED Europe must stand on the side of the Iranian people

On Friday, Trump is scheduled to decide whether or not to extend relief to Iran from some U.S. economic sanctions.

Strong consensus in Brussels today: 1)Iran is complying with #JCPOA, 2)Iranian people have every right to all its dividends, 3)any move that undermines JCPOA is unacceptable. E3 and EU fully aware that Iran's continued compliance conditioned on full compliance by the US. pic.twitter.com/vpib5DQT18

World News // 17 hours ago
Armin Laschet, Merkel ally, elected head of Germany's CDU party
Jan. 16 (UPI) -- German Parliament member Armin Laschet was elected leader of the Christian Democrats and may be next in line to replace Chancellor Angela Merkel when she steps down in September.