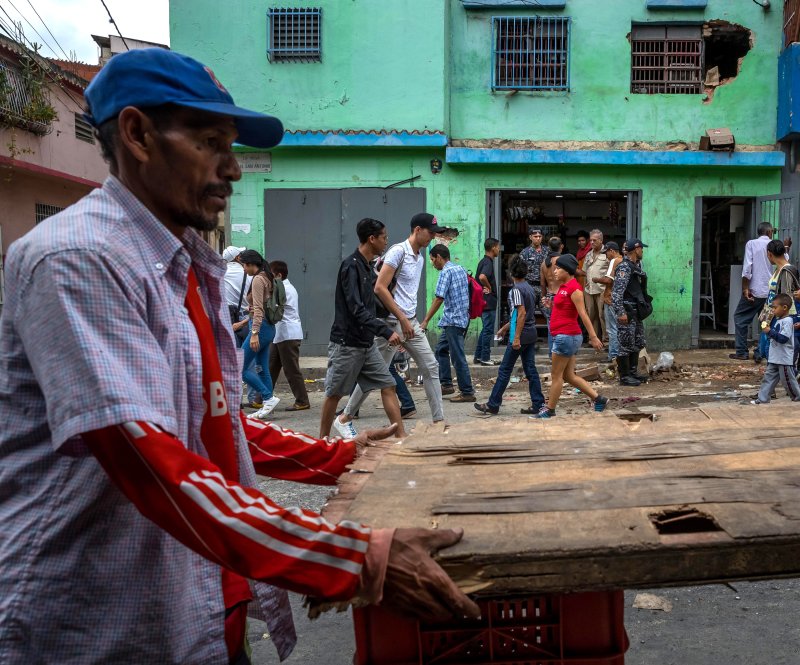 A group of people walk in front of a liquor store that was looted in Caracas, Venezuela. Photo by Miguel Gutierrez/EPA

Jan. 4 (UPI) -- Venezuela's struggles to front $5 billion in debt to pharmaceutical companies have gotten so dire the government tried to swap diamonds and other precious items for medical supplies.

The cash-strapped country proposed an exchange of diamonds, gold and coltan, a rare metal used to make cellphones, for medicines from foreign suppliers to combat a shortage of medical items in the nation's hospitals.

According to the Wall Street Journal, it's not clear the the pharmaceutical companies accepted the deal, but they told government officials they didn't have rules saying whether they could fill non-monetary purchases.

Nevertheless, the proposed exchange illustrates the struggle of Venezuela's President Nicolás Maduro to pay for goods as the country's economy collapses.

Venezuela, which has the largest known oil reserves in the world, is running out of money due to years of negligence and corruption that have resulted in $141 billion in debt to international bondholders and creditors.

The Venezuelan Bolivar weakened over 97 percent in relation to the U.S. dollar and inflation in the country has increased to 4,115 percent.

"Money was created so that we could avoid having to barter for basics," Omar Zambrano, a Caracas-based economist, said. "But we've fallen so far that we're now going back in time."

"It feels like a bluff," Ochoa said. "It's as if they want to show off their assets to give the illusion that there's still an intention of paying even though they can't pay."

Economists are warning that the economic situation could get worse, as hyperinflation may pass 30,000 percent in 2018.

"Those who are now predicting that Venezuela will close 2018 with an inflation rate of 5,000 don't really understand what is happening," Francisco Ibarra, head of the Econometrica company, told the Miami Herald. "We could hit that 5,000 mark already in February."

World News // 29 minutes ago
Sanctions on North Korea effective despite illicit activity, analyst says
April 13 (UPI) -- North Korea's methods of evading sanctions have not been enough to offset their impact, according to a new study.