Iranian students clash with riot police during an anti-government protest around the University of Tehran, Iran. Photo by STR/EPA

"During the events of the past several days, Iran's enemies, using the various tools at their disposal, including money, weapons, politics and security apparatus, have allied to create problems for the Islamic establishment," Khamenei said Tuesday.

The leader cited "the spirit of courage, sacrifice and faith" of the Iranian people as an obstacle for the country's "enemies."

At least 21 people have died in nationwide protests and hundreds have been arrested, the largest demonstrations since the disputed 2009 presidential election.

The protests, which began in late December, began over economic issues and a jump in food prices and quickly expanded to several cities.

Six protesters were killed trying to enter a police station in Qahderijan and two were killed in Khomeinishahr. A member of Iran's Revolutionary Guard was also killed in the town of Najafabad.

Arrested protesters could potentially face the death penalty if the charges include "Moharebeh," or waging war against God.

"In most parts of the country, the situation is now normal and the unrest that took place in certain areas will soon end with the people's cooperation and the efforts of security forces," Zolfaghari said.

"Even the rioters should be dealt with within the framework of law," Nobakht said.

U.S. President Donald Trump tweeted on Tuesday that the United States would be "watching" the protests.

"The people of Iran are finally acting against the brutal and corrupt Iranian regime. All of the money that President Obama so foolishly gave them went into terrorism and into their "pockets." The people have little food, big inflation and no human rights," Trump tweeted. "The U.S. is watching!"

"We believe that there should be meaningful debate about the legitimate and important issues the protesters are raising and we look to the Iranian authorities to permit this," British Foreign Secretary Boris Johnson said.

"Syria is confident that Iran's leadership, government and people will be able to defeat the conspiracy," the Syrian ministry said in a statement. 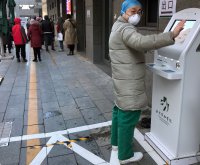 World News // 4 hours ago
Thailand charges protesters with insulting monarchy
Nov. 25 (UPI) -- Authorities in Thailand are charging protesters with lese-majeste, a draconian law that can punish offenders with a 15-year prison sentence for "insulting the monarchy."

World News // 5 hours ago
EU leader hopeful for Brexit deal with deadline just 5 weeks away
Nov. 25 (UPI) -- EU leader Ursula von der Leyen said Wednesday the alliance is in the "decisive days" of Brexit negotiations and hopes a deal is still in the offing, with a little more than a month before the transition deadline.

World News // 5 hours ago
U.N.: Data lacking on North Korea's reported release of 7,000 prisoners
Nov. 25 (UPI) -- A U.N. investigator said he has heard of reports North Korea may have freed as many as 7,000 prisoners, after a report suggested the regime let go of captives suffering from malnutrition.

World News // 12 hours ago
Violence against women is raging in South Africa, data show
Nov. 25 (UPI) -- South Africa has a constitution that's revered for its commitments to human rights, but it also has one of the highest rates of femicide. The U.N. recognizes Nov. 25 as the Day for Elimination of Violence Against Women.

World News // 19 hours ago
Egypt, Gaza reopen border for three days
Nov. 24 (UPI) -- Egypt on Tuesday temporarily opened its border with Gaza for the first time since blocking access during the beginning of the COVID-19 pandemic.