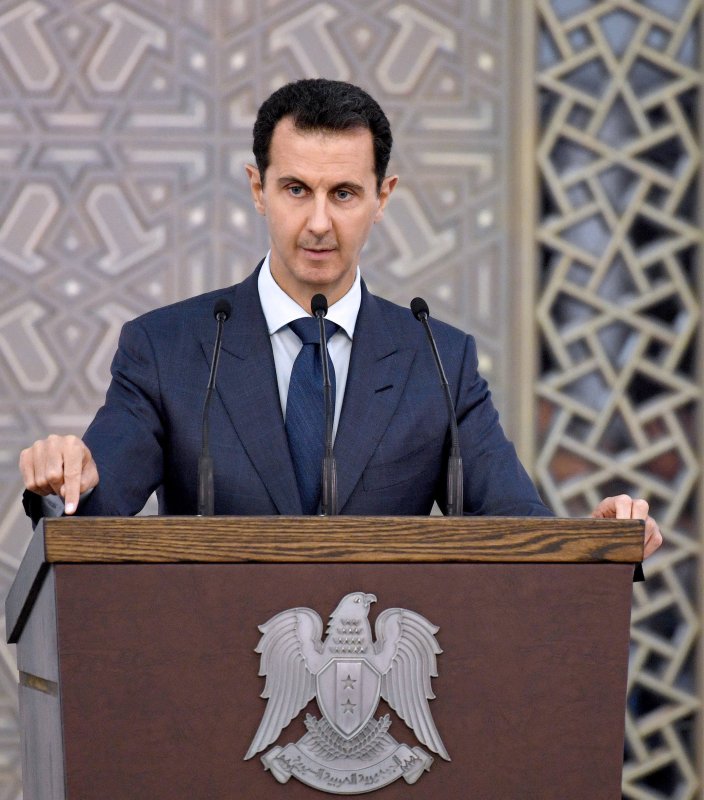 A Syrian government delegation will join U.N.-sponsored peace talks in Geneva after the removal of President Bashar al-Assad was dismissed as a precondition. Photo by SANA/EPA

Nov. 28 (UPI) -- Syria's government delegation is scheduled to arrive in Geneva to hold U.N.-sponsored peace talks with the opposition on Wednesday.

Damascus previously threatened to boycott the peace talks in Switzerland, but agreed to attend after Russia brokered a deal to not have the removal of President Bashar al-Assad as a precondition for the talks.

The new head of the opposition delegation, Nasr Hariri, said Monday he aimed for Assad's removal as a result of the negotiations and that he was prepared to address "everything on the negotiating table."

The two sides were expected to discuss two of the four so-called "baskets" of reform presented by the United Nations including a new constitution and U.N.-supervised elections.

Staffan de Mistura, the United Nations' special envoy for Syria, said he hoped the two warring factions would be able to enter the peace talks "without preconditions" and within the framework of the U.N. Security Council's resolutions.

"We are all moving, I hope, in the direction of implementing Resolution 2254 and a political solution long overdue in Syria," he said.

De Mistura added discussions also will include he issue of detainees, abductees and missing persons, as well as the need for full humanitarian access in any besieged or hard-to-reach-areas, such as Eastern Ghouta.

World News // 4 hours ago
British-Iranian woman targeted by Iran's government could be headed back to prison
Oct. 16 (UPI) -- An Iranian appeals court has upheld the sentence for Nazanin Zaghari-Ratcliffe, a British-Iranian aid worker accused of plotting against the country's Islamist government.

World News // 9 hours ago
Italy rolls out Green Pass amid anti-COVID-19 mandate protests
Oct. 16 (UPI) -- Italy has rolled out its Green Pass, a government-issued health pass for citizens to work amid the pandemic, prompting protests.