South Korean politician: Trump asked if factories could be be moved to U.S. 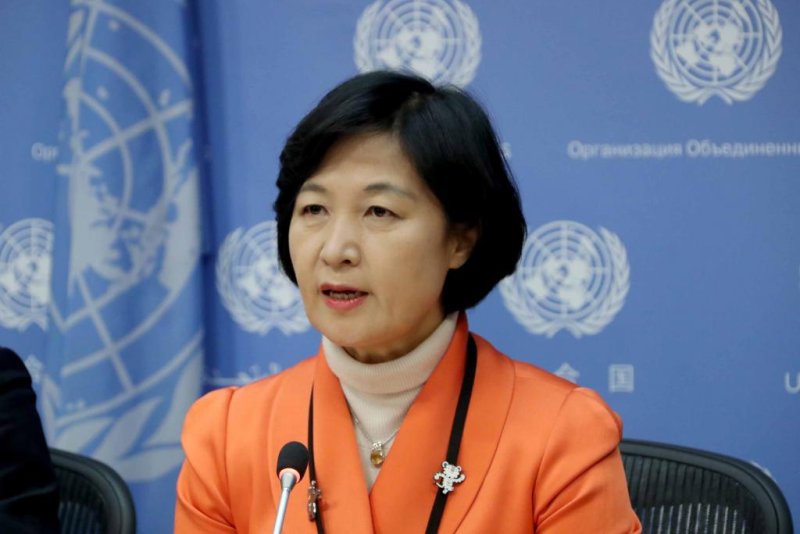 Choo Mi-ae, leader of the ruling Democratic Party, speaks during a press conference at the headquarters of the United Nations in New York on Friday. Photo by Yonhap

According to Choo Mi-ae of the Democratic Party, Trump was on his Marine One helicopter to the heavily fortified demilitarized zone when he turned to White House chief economic director Gary Cohn and said: "I just saw something amazing. There are so many factories. Can't they be built in the U.S.?"

The trip to the DMZ was later canceled due to fog and Trump had to turn back to Seoul to continue his two-day state visit. The trip was watched closely because Trump had threatened to use military options against North Korea and engaged in a war of words with the regime over its nuclear and missile programs.

"I think President Trump understood, while he was in the air for 30 minutes, that 25 million people were living in the area below him and that they would be wiped out in the event of war," Choo said in a meeting with reporters in New York. "But I was so surprised when Director Cohn told me this story. Wasn't [Trump] essentially saying we should build our auto parts factories in the U.S., too?"

Trump's foreign dealings are often marked by a push to secure more business deals, which he says will create jobs for the American people.

Choo and Cohn met in Washington Tuesday shortly after the politician arrived in the United States for a six-day visit.

Of her meetings with government officials in Washington, Choo said she sensed a shift in U.S. policy toward engaging more with the Pyongyang regime.

"When the U.S. talked about all options being on the table, in the past, the emphasis seemed to be more on military options," she said. "But now, I felt that the emphasis was moving toward the possibility for talks."

Some in the U.S. administration suggested South Korea was being too cautious to reach out to the North even under the new liberal government of President Moon Jae-in, Choo said.

"Whether it's between the North and the U.S. or between South and North, we must have talks and exchanges in whatever form so as to lower tensions and stop [the North] from doing more [nuclear and missile] tests," she said.

World News // 10 hours ago
Operation Fly Formula: Australian goat milk to replenish baby formula
May 28 (UPI) -- An Australian producer of goat milk formula, along with other varieties, will ship infant formula to the United States to address its shortage, the U.S. government has announced.

World News // 15 hours ago
Tropical Storm Agatha forms south of Mexico
May 28 (UPI) -- An area of disturbed weather that AccuWeather meteorologists were closely scrutinizing all week over the waters south of Mexico became the first named storm of the 2022 East Pacific hurricane season -- Agatha.

World News // 1 day ago
Israel moves forward with Sunday's flag march despite concerns over violence
May 27 (UPI) -- A controversial flag march in Jerusalem on Sunday will go through the Damascus Gate and the Muslim Quarters, sparking concerns of violence as the event leads to the Western Wall.
Advertisement