Security forces keep watch in front of the Louvre Museum in Paris, France, on February 3 which was closed following a terror attack. On Thursday, a group of Chinese tourists was robbed by assailants armed with tear gas, according to local reports. File Photo by Maya Vidon-White/UPI | License Photo

Nov. 5 (UPI) -- A group of 40 Chinese tourists was robbed in Paris Thursday by assailants armed with tear gas, according to local reports.

French newspaper Le Parisien reported that the tourists were in a parking lot in the Paris suburb of Val-de Marne after a shopping trip when the suspects sprayed tear gas and made off with their bags, which included many luxury items.

"I heard screams, and when I looked out the window, I saw two people assaulting a Chinese guide, and I saw others using tear gas against the tourists," a hotel worker told the newspaper. "For an hour, it was absolute panic ... Many of them [tourists] asked me to hide their bags."

According to Xinhua, the Chinese embassy is urging Chinese people to be more vigilant about the possibility of attacks on them in France.

"The greater Paris region has reported a series of violent muggings and attacks against Chinese tourists and Chinese-French," the Chinese embassy said, according to the South China Morning Post.

In July, thieves used tear gas to rob a group of 19 tourists, including four Americans, outside the Novotel hotel in Roissy-en-France, near Paris' Charles de Gaulle airport.

And in August 2016, a group of 27 Chinese tourists were also robbed with tear gas near the airport.

World News // 4 hours ago
Former President Laurent Gbagbo returns to Ivory Coast after ICC acquittal
June 17 (UPI) -- Laurent Gbagbo, the former president of Ivory Coast, returned to the country for the first time in 10 years on Thursday after he was acquitted of charges of crimes against humanity by the International Criminal Court.

World News // 12 hours ago
Japan to relax COVID-19 restrictions for Tokyo, other areas
June 17 (UPI) -- Japan has lifted the state of emergency in place in Tokyo and other parts of the country, and might apply a maximum 10,000-spectator capacity at the Tokyo Olympics. 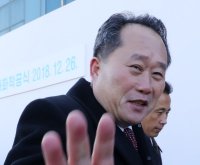