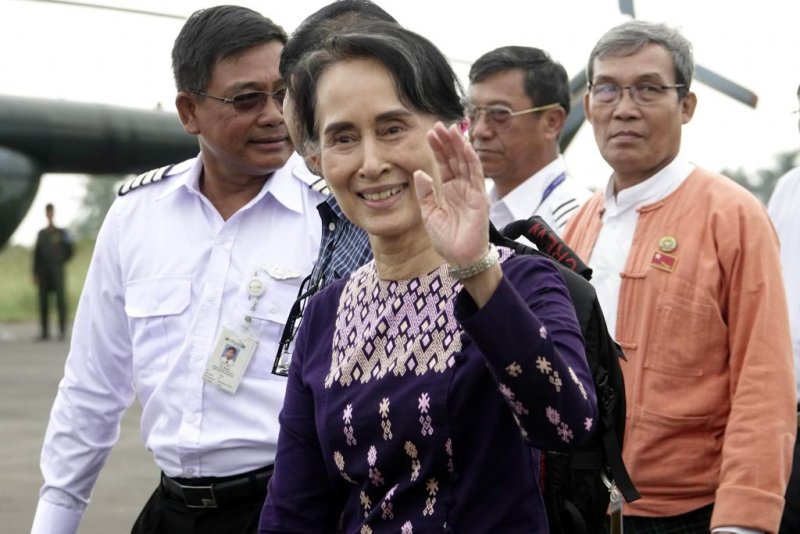 Nov. 2 (UPI) -- Myanmar leader Aung San Suu Kyi visited Rakhine state on Thursday -- her first after months of violence and the mass exodus of Rohingya Muslims from the region.

The visit comes after Suu Kyi has received criticism for her refusal to publicly speak about the violence against the Muslim minority -- more than 600,000 of whom have fled to Bangladesh in the past few months to escape violence.

Under international pressure, Suu Kyi, Myanmar's de-facto leader established the Union Enterprise For Humanitarian Assistance Resettlement and Development in Rakhine to help in the crisis.

Suu Kyi led a group of 20 people on the visit Thursday, including members of the delegation of newly created UEHRD to see the situation in Rakhine firsthand.

It remains unclear to some whether Suu Kyi will be "part of the solution or part of the problem," as Human Rights Watch said.

"The big question is whether Aung San Suu Kyi's visit to Rakhine state, and especially Maungdaw, marks the beginning of an effort to break out military cordon placed around information she receives about events on the ground," Phil Robertson, deputy director of Human Rights Watch's Asia Division, said.

The Rohingya have been described by the United Nations as the world's most persecuted people, and the global body has labeled mass killings in Myanmar as a humanitarian catastrophe. Many Rohingya have died attempting to flee to Bangladesh.