Deutsche Bahn said it plans to name one of its trains after Holocaust victim Anne Frank, choosing her name out of a pool of 25 famous Germans. Photo by Sven Hoppe/EPA

A photo of Anne Frank is seen at the children's memorial at the Jewish cemetery in Warsaw, Poland. File Photo by Ronald Wilfred Jansen/Shutterstock

Oct. 30 (UPI) -- The decision to name a high-speed train after prominent Holocaust victim Anne Frank has generated a bit of controversy in Germany.

German rail operator Deutsche Bahn -- the successor to the rail system that transported millions of Jews to concentration and work camps during World War II -- has defended its decision to name a train after Frank.

Officials said Frank's name was chosen out of a pool of 25 famous Germans, and company spokesperson Antje Neubauer said Frank symbolized tolerance and a "peaceful co-existence of different cultures, which is more important than ever in times such as this."

The Anne Frank Foundation said, though, that seeing Frank's name on the train is "painful."

"The naming calls for controversy and we understand. The combination of Anne Frank and a train calls for associations with the Jewish persecution and deportations during World War II," the foundation said.

"The combination is painful for people who have experienced deportations and causes pain to those who the consequences of bringing with it."

The foundation acknowledged that the rail company likely had "good intentions" with the move, and said it wouldn't take further action.

Anne Frank and her family were deported to the Auschwitz death camp in 1944. She ultimately died in the Bergen-Belsen camp at the age of 15. Her renowned personal diary while in hiding with her family, The Diary of Anne Frank, is an international best-seller. 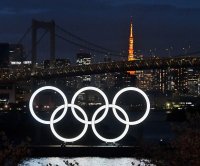