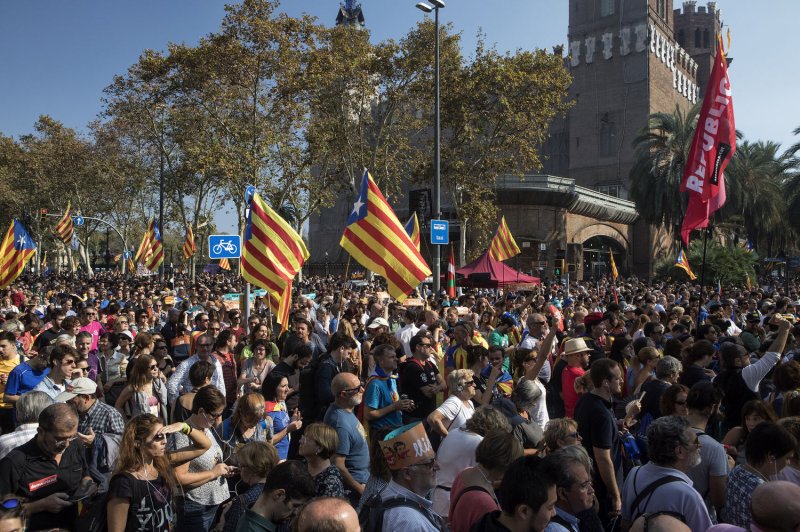 People celebrate at the Sant Jaume Square in Barcelona in Spain on Friday after Catalonia's regional parliament voted to declare independence from Spain. But the Spanish government in Madrid imposed direct rule on the region. Photo by Xavi Herrero/ UPI | License Photo

Participants wave Spanish flags during a protest called by the Defence of the Spanish Nation Foundation in support of Spain's unity at the Colon square in Madrid, Spain, on Saturday. Photo by Javier Lopez/EPA-EFE

Oct. 28 (UPI) -- Spain's central government officially took control of Catalonia on Saturday, one day after announcing the dissolution of the regional Parliament.

Puigdemont, during a televised address from an undisclosed location, called for "democratic opposition."

"Let's move forward with the only winning attitude -- without violence, insults, in a very inclusive way, respecting opinions and symbols and protests by other people who are against what the parliamentary majority decided," he said.

"I ask you to have patience, perseverance and perspective. The best way to defend the point we have reached now is the democratic opposition to Article 155."

He was referring to the constitutional provision which allowed Madrid to impose direct rule.

Throughout the night Friday in Barcelona, the regional capital of Caalonia, demonstrations for and against independence were going on.

In an internal note, Mossos d'Esquadra's regional police force members were urged to act in a neutral manner.

"Given that there is it is likely to be an increase in gatherings and rallies of citizens in all the territory and that there are people of different thoughts, we must remember that it is our responsibility to guarantee the security of all and help these to take place without incident," the memo said.

During a referendum on Oct. 1, about 90 percent voted in favor of independence although turnout was only 43 percent and anti-referendum residents boycotted.