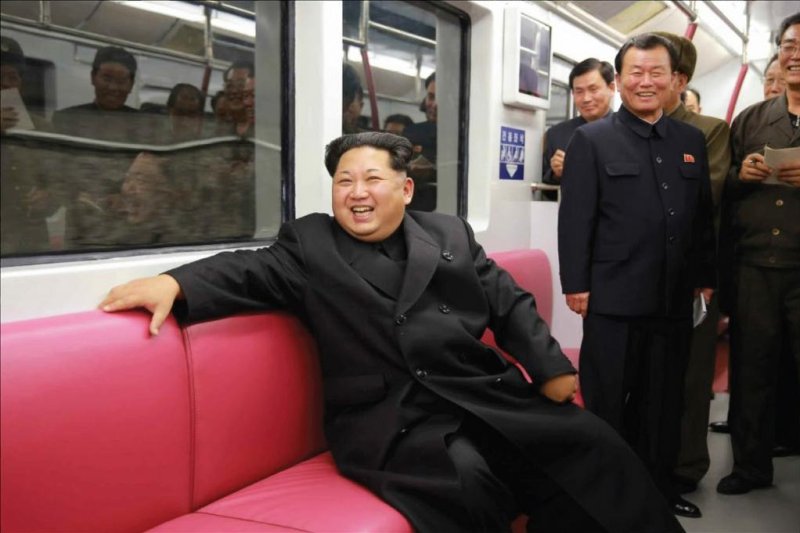 North Korea’s Kim Jong Un on board a subway train in Pyongyang in 2015. The regime purchased electric trains and other transportation equipment from the Czech Republic decades ago but Prague may never have been paid for the goods. File Photo by Rodong Sinmun/EPA

Oct. 27 (UPI) -- North Korea did not repay $2.6 million in debt to the Czech Republic for 30 years, and neighboring Poland struggled with obtaining payments from the Kim Jong Un regime, according to Voice of America.

Prague then tried to negotiate with North Korea in 2009 and again in 2010 but failed to find a solution, according to VOA.

The Czech Republic exported equipment to North Korea during its period of communist rule.

Transportation gear, electric trains and heavy equipment were exported to North Korea, but Pyongyang may never have paid for the goods after receipt.

Vintrlik said North Korea requested all debts be forgiven but added Prague has no intention of canceling any of North Korea's obligations.

According to documents acquired by VOA, North Korea requested about 95-100 percent of outstanding debt with the Czech Republic be canceled.

Poland has also been unable to recoup losses after delivering military Mi-2 helicopters to North Korea before the fall of the communist government in Warsaw.

North Korea has yet to repay the remainder of the $4.32 million debt it owes Poland after paying $1.7 million of the debt in 2012.

Other countries in Europe seeking repayment of debt include Sweden, Switzerland and Finland, according to VOA.

North Korea may be feeling squeezed as it copes with some of the heaviest sanctions in its history.

World News // 12 hours ago
Turkey agrees to let Sweden and Finland join NATO
June 28 (UPI) -- NATO Secretary-General Jens Stoltenberg said Tuesday that the military alliance has reached a deal to admit Sweden and Finland after Turkey, a previous holdout, agreed to it.

World News // 10 hours ago
Chlorine gas leak in Jordan kills at least 13, injures hundreds
June 28 (UPI) -- A chlorine gas leak at Jordan's port of Aqaba killed at least 13 people and injured 260 others. Investigators said a crane malfunction caused a chlorine tank to fall as it was being loaded, releasing the toxic gas.

World News // 14 hours ago
Russia sanctions first lady Jill Biden, daughter among 25 Americans
June 28 (UPI) -- First Lady Jill Biden and her daughter Ashley Biden are two of the 25 Americans covered by Russia's latest round of sanctions, barring them from entering the country, the Russian Foreign Ministry said in a statement.

World News // 16 hours ago
German court sentences 101-year-old ex-guard to prison for aiding murders at Nazi camp
June 28 (UPI) -- A 101-year-old German man was sentenced to five years in prison on Tuesday after being convicted of aiding thousands of deaths as a guard in a Nazi concentration camp during World War II.

World News // 20 hours ago
Biden arrives in Spain to attend NATO summit, pledges billions for food security to finish G7
June 28 (UPI) -- President Joe Biden attended the final session of the G7 summit in Germany on Tuesday before he left for Spain to take part in a NATO Summit there, which will focus on Russia's war in Ukraine and NATO's future plans.
Advertisement