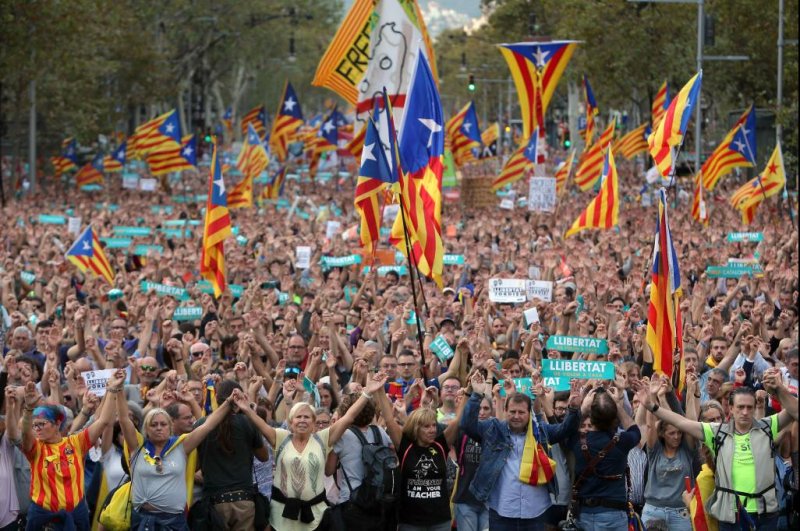 Roughly 450,000 pro-independence protestors came out in Barcelona in support of Catalonia's autonomy. Photo by Toni Albir/EPA

Oct. 23 (UPI) -- A Catalan official said Monday the region will not follow orders from the Spanish government if Madrid employs a constitutional article to assert control over the region.

Catalan foreign affairs spokesman, Raul Romeva, told BBC that the central government was "acting against the will of Catalans."

Spanish Prime Minister Mariano Rajoy announced plans to invoke Article 155 of Spain's 1978 constitution which would allow the country to effectively control Catalonia despite a Catalan independence vote earlier this month for secession in the region.

If Article 155 is triggered, Catalan's president and top ministry and government officials will be put out of the job and replaced by Madrid officials until new elections are called for. Catalonia's police force and public broadcaster would be taken over as well.

"They [Catalan leaders] haven't been put in the role by some divine power, they've been put in their roles by the constitution and the statute of autonomy," Spain's Deputy Prime Minister, Soraya Sáenz de Santamaría, said.

"They're completely not in compliance with the constitution and the statute of autonomy... They may be living in some other reality but the political and legal reality is that they will be removed."

Spain's Senate is expected to approve this path forward later this week despite 450,000 people coming out in protest on Saturday in Barcelona.

Catalan President Carles Puigdemont called the Rajoy's move to take back the region's autonomy as the "worst attack on Catalonian institutions and its people since the Franco dictatorship."

In response to the Spanish government's intent, pro-independence parties are calling for "mass civil disobedience" with a plan in works to form a human shield to block efforts by the Spanish authorities to take control of Catalonia.

"I can tell you is that the people and the institutions in Catalonia will not let this happen," Romeva said.

The Catalan government said that of the 43 percent who took part in the Oct. 1 referendum, 90 percent were in favor of independence.

World News // 8 minutes ago
Al Jazeera asks for ICC to investigate Abu Akleh's death
Dec. 6 (UPI) -- The Al Jazeera Media Network said it officially filed a request to the International Criminal Court to conduct an investigation and prosecution of those responsible for the death of its journalist Shireen Abu Akleh in th

World News // 13 hours ago
1 in 5 experience workplace violence worldwide
Dec. 5 (UPI) -- A first-ever global survey of workplace harassment and violence found at least one in five people experience some form of violence at work.