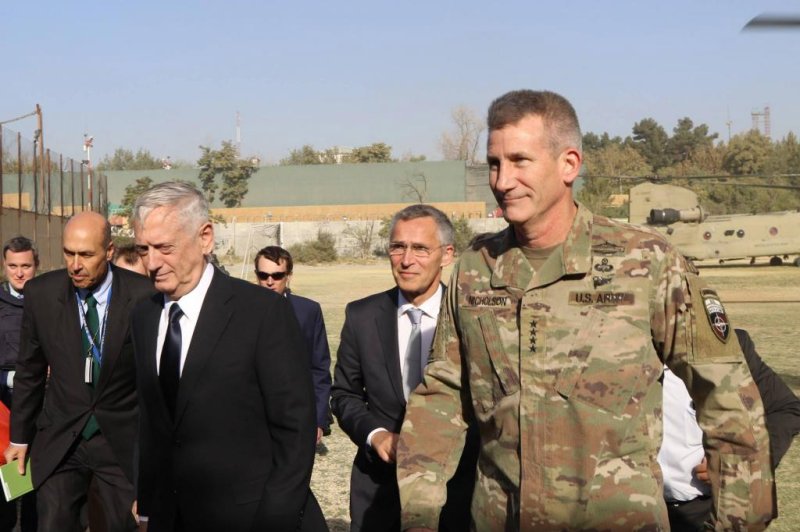 Sept. 27 (UPI) -- The Taliban and the Islamic State have claimed responsibility for a rocket attack at the airport in Kabul, Afghanistan, on Wednesday -- which militants say was an attempt to kill U.S. Defense Secretary James Mattis.

Dozens of rockets were launched at the airport just hours after Mattis and NATO Secretary General Jens Stoltenberg arrived, unannounced, to meet with U.S. forces and Afghan officials.

"Missiles were fired on Kabul International Airport from Deh Sabz district, damaging the air force hangers and destroying one helicopter and damaging three other helicopters, but there were no casualties," airport chief Yaqub Rassouli said.

The Taliban claimed credit and said the target was Mattis. Afghan President Ashraf Ghani said the Pentagon chief was unharmed, as he had departed before the attack.

Shortly after, the Islamic State also claimed responsibility for the attack through its Amaq News Agency.

Officials immediately closed down the airport and Ghani said the government's Crisis Response Unit was called in to check runways and clear out debris.

Mattis and Ghani later held a press conference after a closed-door meeting. Mattis noted that the attacks were a crime and that the Taliban had no respect for the people of Afghanistan. Stoltenberg said the attack was a sign of the Taliban's weakness.

Pentagon to send 3,000 more troops to Afghanistan At least 2 dead in suicide blast at Kabul stadium How Iran has become pivotal to the future of the Middle East

World News // 46 minutes ago
1,300-foot-long bridge collapses in northern Italy; 1 hurt
April 8 (UPI) -- A bridge in northern Italy collapsed Wednesday and injured one person, but authorities believe the casualties would have been worse under normal traffic conditions without coronavirus-related restrictions.

World News // 1 hour ago
French economy records 6% decline in Q1; worst dip in 75 years
April 8 (UPI) -- The French economy declined 6 percent in the first quarter of 2020 caused by reaction to the coronavirus -- its greatest decline since the end of World War II, the Bank of France said Wednesday.

World News // 3 hours ago
North Korea acquires Russian pedigree horses, Moscow says
April 8 (UPI) -- North Korea may have purchased as many as 30 pedigree horses from Russia, and the order may have come directly from Kim Jong Un, according to recent reports.

World News // 5 hours ago
China remains wary of Wuhan travelers after lockdown lifted
April 8 (UPI) -- China may have lifted a state-imposed lockdown on the city of Wuhan, but outbound travelers from what was the epicenter of the COVID-19 outbreak are facing severe limitations on their movements within China.