A Saudi woman sits behind the wheel of a car in Riyadh, Saudi Arabia, in 2013. King Salman issued a decree Tuesday, saying that by next June, women in his nation would be able to legally drive. File Photo courtesy EPA-EFE/STR

The decision caps years of pressure on the Saudi government to allow women to legally drive alongside men. In his decree, which was posted on the government-run Saudi Press Agency's website, King Salman also disclosed the government's intention to form a committee to help roll out the proposal.

Saudi Arabia has long forbidden women to legally drive, but some have speculated in recent years that an end to the ban was imminent. In November 2014, an adviser to King Salman rejected the validity of an Associated Press report indicating the possibility that women more than 30 years old could soon drive with a number of restrictions.

The ban itself has been a flashpoint at times for the promotion of women's rights in Saudi Arabia. Women had taken part in driving protests, while petition campaigns have surfaced periodically at least in the last 10 years.

The New York Times reported that government and religious leaders have made wide-ranging explanations for the policy -- sometimes saying the practice would cause a breakdown of Saudi families or would lead to a rise in sex and pornography.

"This is a great victory for many Saudi women," Shaalan said. "This was the one file and issue which Saudi women have fought not just years, but decades for. Every time we asked, we were told the time was not right."

World News // 21 minutes ago
Heathrow chief says vaccinated U.S. travelers will be welcomed by end of July
July 26 (UPI) -- Heathrow Airport's Chief Executive John Holland-Kaye said Monday that Europe's busiest airport will accept travelers from the United States who have received a coronavirus vaccine by the end of the month.

World News // 36 minutes ago
North Korea urges citizens to become 'water pumps' amid drought
July 26 (UPI) -- North Korean farmers could be reeling from the impact of record-high temperatures as extreme weather takes a toll on crops.

World News // 1 hour ago
Global Hawk drone flies near North Korea ahead of Korean War anniversary
July 26 (UPI) -- An unmanned U.S. reconnaissance aircraft flew over the Korean Peninsula ahead of North Korea's observance of "Victory Day," which marks the anniversary of the 1953 Korean Armistice Agreement.

World News // 3 hours ago
U.N. report: Civilian casualties in Afghanistan at record level this year
July 26 (UPI) -- More women and children have been killed or injured in Afghanistan over the first six months of 2021 than in the first half of any year since 2009, when record-keeping began, the U.N. mission in Afghanistan said Monday. 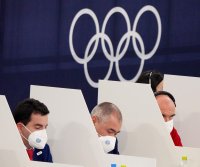 World News // 21 hours ago
Japan's COVID-19 deaths drop 5% amid state of emergency during Games
July 25 (UPI) -- Japan is staging the Summer Olympics during a state of emergency and without spectators with coronavirus cases surging though the situation nowhere nearly as dire elsewhere.