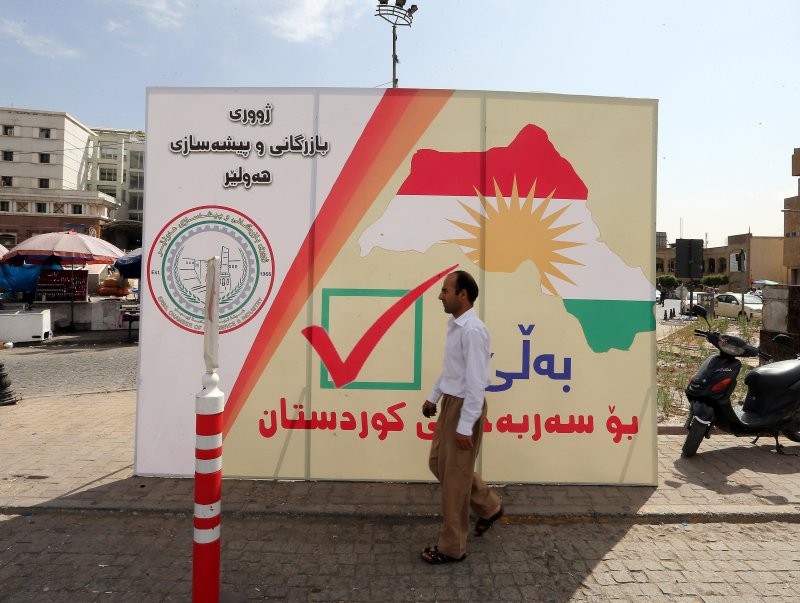 An election poster, supporting independence for Kurdistan, is seen on a street in Irbil, Iraq, Sunday. More than 3 million people are expected to vote in the referendum Monday. Photo by Mohamed Messara/EPA

A majority is expected to vote in favor of independence -- to break away from Iraqi rule -- but opponents to the vote say the move could lead to regional destabilization and ethnic violence.

More than 3 million people are expected to vote in Monday's non-binding referendum.

Several nations, including the United States, has voiced opposition to the independence vote. Turkey and Iraq have even threatened unspecified "coordinated measures" if the referendum was even held.

Iran, Iraq's adversarial neighbor, has also spoken out against the referendum vote.

"Any move damaging stability, security and territorial integrity of Iraq is wrong and inappropriate," Iranian foreign affairs spokesman Bahram Qasemi said Monday. "Iran has always respected the people in the region, particularly the Kurdish people, and it has always tried to help and support them."

The Kurds, an ethnic group of 35 million people living in the Middle East, have awaited independence since the 1920 Treaty of Sevres -- which broke the Ottoman Empire into several sovereign nations and proposed an independent Kurdistan.

Kurds in Iraq, who are regarded as among the fiercest fighters against the Islamic State, have threatened for years to break away from Iraq and form a separate state. They accuse the Baghdad government of violating obligations to Kurdistan and denying them the appointed share of the federal budget.

"From World War I until now, we are not a part of Iraq. It's a theocratic, sectarian state. We have our geography, land and culture. We have our own language. We refuse to be subordinates. The parliament in Baghdad is not a federal parliament. It's a chauvinistic, sectarian parliament. Trust is below zero with Baghdad," Kurdish President Masoud Barzani said in a recent interview.

World News // 39 minutes ago
At least 6 dead, dozens hurt in Cameroon soccer stampede: state TV
Jan. 24 (UPI) -- At least six people died and dozens more were injured Monday during a stampede outside of a stadium in Cameroon during the Africa Cup of Nation, state television reported.

World News // 3 hours ago
Stowaway survives 11-hour plane ride from Africa to Amsterdam
Jan. 24 (UPI) -- A stowaway from South Africa spent 11 hours in the nose wheel of a cargo plane that landed in Amsterdam.

World News // 5 hours ago
Man who stabbed woman dead in London is run over by car and killed
Jan. 24 (UPI) -- A man believed to have killed a woman by stabbing her to death on a road in west London also died after he was run over by a car on Monday, police said. 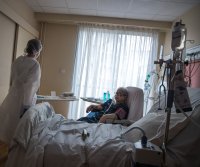