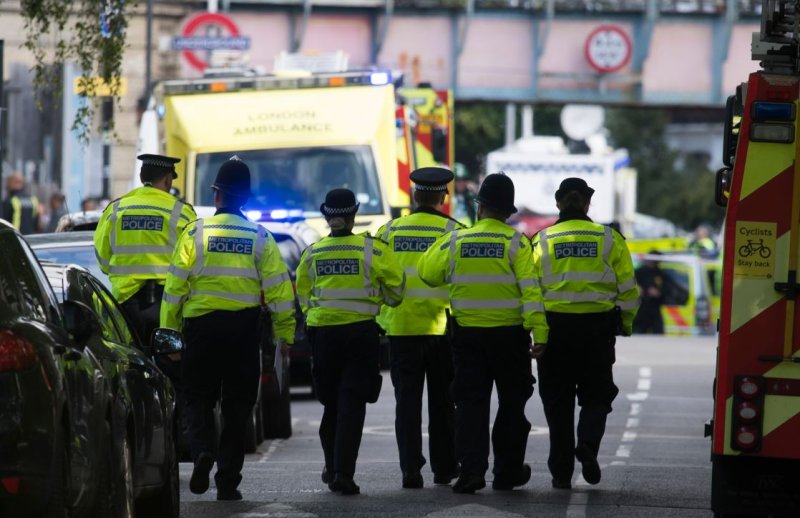 Police in London arrested an 18-year-old man in connection with an explosion on a subway car at Parsons Green subway station under section 41 of the Terrorism Act on Satrday. Photo by Will Oliver/EPA

An injured woman is escorted away from 'Parsons Green' station in London on Friday after a terrorist device detonated during the morning rush hour. Photo by Matt Oliver/EPA

Police and emergency services gather at the Parsons Green Underground station in London on Friday in response to reports of an explosion on an underground tube train. Photo by Will Oliver/EPA-EFE

A forensics officer works at the scene of an incident on the District line in London on Friday. A bomb exploded on an underground train near the Parsons Green station, injuring a number of people in an apparent terror attack. Photo by Andy Rain/EPA-EFE

Sept. 14 (UPI) -- A police manhunt led to a "significant" arrest in connection with an explosion in what officials called a terrorist attack on a crowded London subway car.

Kent Police arrested an 18-year-old man in the port area of Dover on Saturday morning under section 41 of the Terrorism Act, the Telegraph reported.

"We have made a significant arrest in our investigation this morning," Deputy Assistant Commissioner Neil Basu said. "Although we are pleased with the progress made, this investigation continues and the threat level remains at critical."

Government officials raised the terror threat level from "severe" to "critical," after the blast which occurred as a train left Parsons Green station and caused a fire that swept through the subway car on Friday. At least 29 passengers were injured, as several were burned and dozens attempted to escape unharmed.

The suspect was taken into custody at a local police station and will later be transferred under guard to another station in south London.

The Guardian reported detectives will question the man and examine any computers and phones he owns in search of additional information about the attack and any potential accomplices.

"This arrest will lead to more activity from our officers. For strong investigative reasons we will not give any more details on the man we arrested at this stage," Basu said.

Counter-terrorism investigators hope to apprehend the suspects behind the attack before they are able to strike again.

"The public should remain vigilant as our staff, officers and partners continue to work through this complex investigation," Basu said. "We are not, at this time, changing our protective security measures and the steps taken to free up extra armed officers remain in place."

World News // 18 hours ago
Italy rolls out Green Pass amid anti-COVID-19 mandate protests
Oct. 16 (UPI) -- Italy has rolled out its Green Pass, a government-issued health pass for citizens to work amid the pandemic, prompting protests.