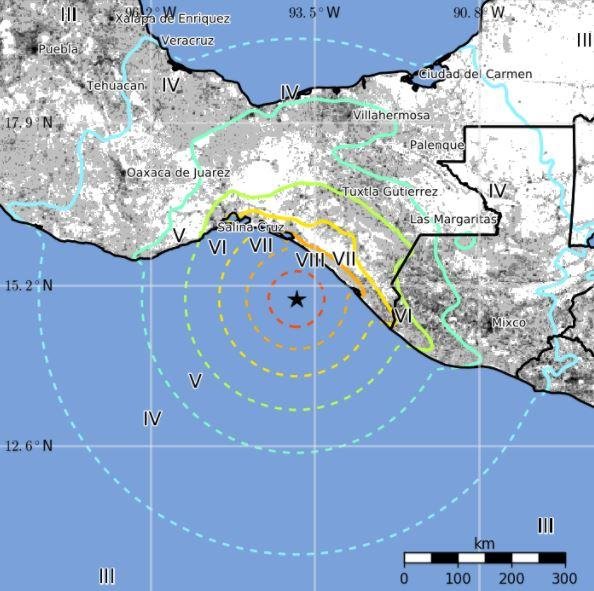 Sept. 8 (UPI) -- The U.S. Geological Survey recorded a massive 8.1 earthquake near Mexico's southern Pacific Coast Thursday night that has killed at least two people, as shocks as shocks were felt throughout the country.

The earthquake's epicenter was 102 miles west of Tapachula in southern Chiapas state, near the Mexico-Guatemala border. Local officials there told reporters that there were two confirmed deaths as a result of the quake.

The region where the earthquake hit near is one of the poorest in Mexico and the USGS said housing construction will likely be impacted.

"Overall, the population in this region resides in structures that are a mix of vulnerable and earthquake resistant construction," the USGS said. "The predominant vulnerable building types are adobe block with concrete bond beam and mud wall construction."

The quake caused buildings to sway as far away as Mexico City, the nation's capital, causing people to run out into the streets to avoid being caught in structure collapses, according to social media reports. Mexican newspaper El Pais tweeted a video of Mexico City's iconic Angel of Independence statue swaying during the quake.

"It's a big quake. It's about 70 miles offshore, but it's not an unheard of quake," USGS geophysicist Randy Baldwin told NBC News.

He added: "This is a large quake. I'm sure that it will be widely felt and possibly damaging."

After the quake, the National Weather Service issued a tsunami warning off the coast of Chiapas.

World News // 9 hours ago
North Korea suggests it may resume ICBM, nuclear tests
SEOUL, Jan. 20 (UPI) -- North Korean leader Kim Jong Un said it was time to "examine the issue of restarting all temporally suspended activities" in an apparent reference to lifting its moratorium on long-range missile and nuclear weapons.