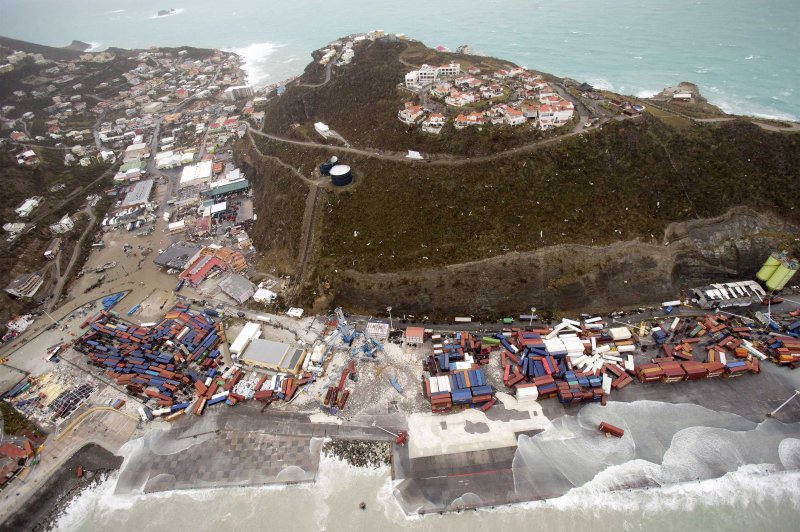 Sept. 7 (UPI) -- Powerful Hurricane Irma killed at least 10 people and left a path of destruction in the eastern Caribbean Islands on Thursday.

The Category 5 hurricane, with maximum sustained winds of 185 mph, destroyed the islands' homes and buildings and left millions without electricity.

The death toll, which was likely to rise, was four in St. Martin and St. Barthelemy, revised down from the death toll of eight emergency officials gave earlier in the day. There was also one dead in Anguilla and one, a child, in Barbuda. Later on Thursday, three deaths were reported in Puerto Rico.

Gaston Browne, the prime minister of Antigua and Barbuda, said the island of 1,600 people was "barely habitable" with about 95 percent of the structures damaged and communication cut off Wednesday.

RELATED Hurricane Katia expected to strengthen as it nears Mexico

From Antigua, he told the BBC it would cost $100 million to rebuild Barbuda.

Browne said Antigua, with a population of around 80,000 people, escaped major damage but airplanes are unable to land on the island.

RELATED Irma moving toward Bahamas, near Turks and Caicos for now

Princess Juliana International Airport, the third largest in the Caribbean, was destroyed in the Dutch-controlled Sint Maarten in St. Martin. The northern French side also was heavily destroyed.

President Donald Trump owns a waterfront estate there but information about his property was not reported, according to The Washington Post.

"It's an enormous catastrophe -- 95 percent of the island is destroyed," top local official Daniel Gibbs told BBC of Saint Martin.

The storm passed by Puerto Rico on Wednesday afternoon, leaving about two-thirds of the island's 1 million electric customers without power in the U.S. territory. Ramos, chief executive of the island's electric utility, also said 56,000 of the nation's 3.4 million residents were without potable water.

Gov. Ricardo Rossello told CNN Puerto Rico was hit hard even though the eye of the storm was off shore with winds of more than 100 mph.

"From the center of operations that we have over here in San Juan, there is pretty significant damage already done," he said.

Puerto Rico's three deaths were an elderly woman after a fall en route to a shelter, a younger woman from electrocution in her home and a man from a traffic accident.

Charlyn Gaztambide Janer told NBC News "this is a lot better than it was predicted to be" although power was out in her home in the San Juan suburb of Guaynabo.

"I lived through Hurricane Hugo [in 1989] and that was far, far worse. That was horrible. This is nothing compared to that."

Michael Coleman, who took shelter in a cement bunker in the U.S. Virgin Islands' St. Thomas said "the wind was so intense. Trees and roofs flying."

In the British Virgin Islands, Kennedy Banda said he and his family were taking shelter in a bathroom as the strong winds blew out the windows of his home. The hurricane's eye passed over the north islands.

"It is a traumatic time here in the British Virgin Islands," he said in a blog post dictated by satellite phone. "Hurricane Irma is continuing a path of destruction that brought the eye of the storm to Necker Island, Moskito Island and the whole surrounding area."

He said he and others on the island were safe in a concrete cellar on the island. He urged those still in the path of Irma to "stay inside, ideally in organized shelters or other solid concrete structures with water, supplies and emergency contact plans."

The most powerful Atlantic storm in a decade battered Dominican Republican, Haiti, and Turks and Caicos on Thursday afternoon, and was then headed to Cuba, the Bahamas and Florida but was forecast by the National Hurricane Center to drop to a Category 4.

In the Dominican Republic, Cabarete and Sosua -- popular resort areas in the Puerto Plata region -- were battered by the storm.

The Dominican Republic's president also canceled work in the government and companies.

In Haiti, 800 temporary shelters were set up, and the Haitian government called for all institutions, public and private, to be shut down Thursday afternoon.

In Turks and Caicos, officials halted emergency services temporarily as the storm came close. They warned of severe floods and storm surges.

"All residents and tourists are instructed to stay indoors, as responders will not be able to provide relief services during this time until further notice," said Virginia Clerveaux, the director of the Disaster Management Department.

"This is the largest such evacuation in the history of the country," Prime Minister Hubert Minnis said.

World News // 8 hours ago
Xi Jinping returns to Hong Kong for first trip outside of mainland China in two years
June 30 (UPI) -- Chinese President Xi Jinping traveled to Hong Kong on Thursday to mark the 25th anniversary of its return from British rule and to inaugurate the administration of its new chief executive, John Lee.

World News // 14 hours ago
Swiss chocolate maker stops production after finding salmonella
June 30 (UPI) -- One of the world's largest chocolate producers is shutting down operations at one of its massive factories because of a salmonella outbreak, the company confirmed Thursday.

World News // 15 hours ago
China rebukes NATO for singling out Beijing in latest security threat guide
June 30 (UPI) -- China's mission to the European Union rebuked NATO on Thursday for singling out China for the first time in its latest Strategic Concept, which provides the alliance a guide to respond to security threats and challenges.

World News // 16 hours ago
Denmark 'grossly misleading' when ordering mink cull during pandemic, report says
June 30 (UPI) -- A Danish committee released a report accusing the government of making "grossly misleading" statements in the early months of the COVID-19 pandemic when ordering the country's mink population to be culled.

World News // 1 day ago
NATO summit: Biden says U.S. will support Ukraine against Russia 'for as long as it takes'
June 30 (UPI) -- Concluding the NATO summit in Spain, President Biden told reporters that the security meetings were "historic" and significant progress was made for the future of the World War II-era defensive alliance.

World News // 23 hours ago
Israeli Knesset dissolves, sets 5th national elections in 4 years
June 30 (UPI) -- Israel's parliament on Thursday voted to dissolve and set new elections for November, which will be country's the fifth in less than four years, after an unsuccessful period with an experimental coalition government.

World News // 1 day ago
Ferdinand Marcos Jr., son of former dictator, sworn in as president of Philippines
June 29 (UPI) -- Ferdinand Marcos Jr., son and namesake of the dictator who was driven into exile by a popular revolt in 1986, completed his family's stunning return to power when he was sworn in on Thursday as Philippines president.
Advertisement