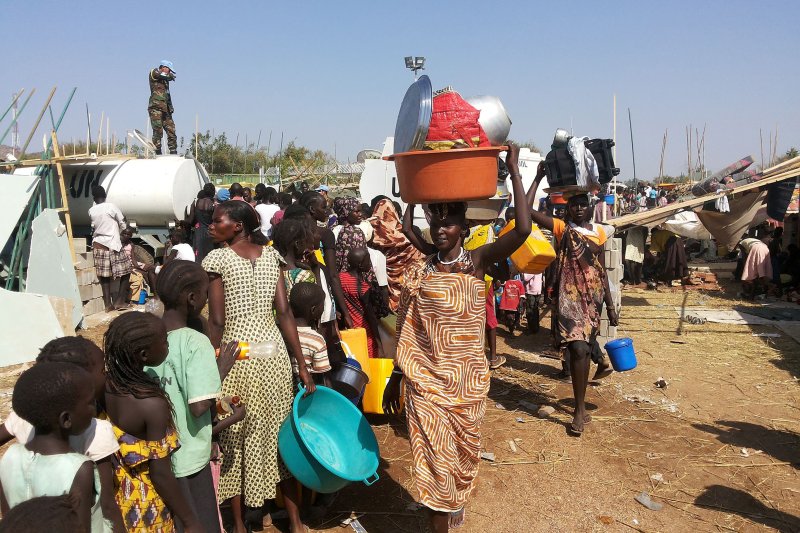 Since the beginning of the country's civil war that year, several South Sudan officials have profited from corruption, according to allegations made by the U.S. Treasury Department Wednesday. File Photo by Julio Brathwaite/UPI/UN Photo

The sanctions were placed on on Gen. Malek Reuben Riak Rengu, the army's deputy chief of staff in charge of military procurement; Michael Makuei Lueth, South Sudan's information minister; and Paul Malong Awan, the former chief of staff of the South Sudan People's Liberation Army who was recently fired by Kiir.

The Treasury Department said the men not only held responsibility for the deteriorating humanitarian situation in South Sudan, but profited from it, as well.

Any U.S. assets owned by the offcials will be blocked and American citizens are prohibited from engaging with them, reported Bloomberg. They will also be barred from entering the United States.

"These actions send a clear message to those enriching themselves at the expense of the South Sudanese people that we will not let them exploit the U.S. financial system to move and hide the proceeds of their corruption," said Sigal Mandelker, undersecretary for terrorism and financial intelligence. "Treasury will forcefully respond to the atrocities ongoing in South Sudan by targeting those who abuse human rights, seek to derail the peace process and obstruct reconciliation in South Sudan."

"This is a man-made crisis, and one the government of South Sudan can stop," she said.

South Sudan has been involved in a raging civil war since 2013 between Kiir's supporters and opposition backers. Since then, nearly 2 million children have been displaced and 1.1 million children are significantly malnourished as a result of mass food shortages.

World News // 6 hours ago
Norway attack: victims killed by stabbing, not by arrows
Oct. 18 (UPI) -- Police said Monday that the five people who were killed last week in an attack in Norway were stabbed, not shot at by a bow and arrows.

World News // 7 hours ago
Russia closes diplomatic mission to NATO over spying accusations
Oct. 18 (UPI) -- Russia said Monday that it's closing its military liaison mission to NATO and recalled staffers to Moscow, in retaliation to the alliance expelling several Russians last week and accusing them of espionage.

World News // 8 hours ago
Police intercept $250 million worth of cocaine on yacht off Portugal
Oct. 18 (UPI) -- Authorities in Portugal said Monday that they have intercepted a shipment of cocaine worth more than $200 million on a yacht in the Atlantic Ocean.

World News // 11 hours ago
Slain MP David Amess to be honored; deputy PM says online hate 'out of control'
Oct. 18 (UPI) -- British PM Boris Johnson will lead a series of tributes planned in the House of Commons on Monday to honor slain lawmaker David Amess, who was stabbed to death while meeting with a group of constituents.

World News // 12 hours ago
Costa Rica, Italian city among first 5 winners of Prince William's 'Earthshot Prize'
Oct. 18 (UPI) -- Britain's Prince William on Sunday night announced the winners of his first-ever "Earthshot Prize," an effort to inspire people and governments around the world to find solutions for climate change and other challenges.

World News // 15 hours ago
Facebook to hire 10K EU workers to build 'metaverse'
Oct. 18 (UPI) -- Facebook has announced plans to hire 10,000 people in Europe over the next five years to develop its new platform.