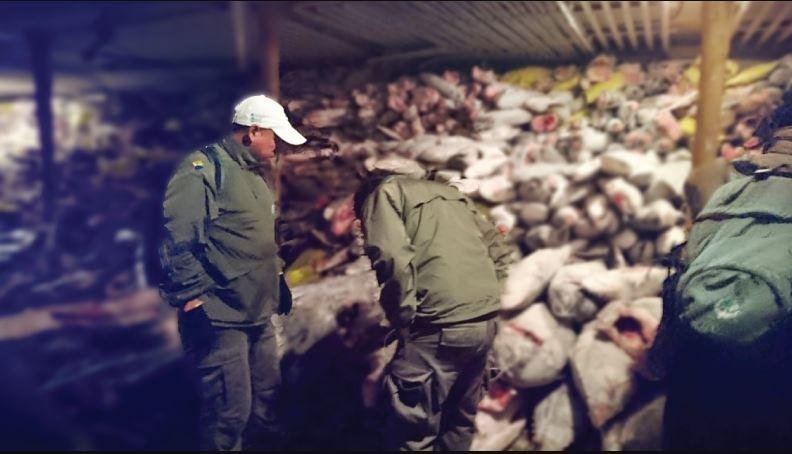 Ecuadorian officials inspect a Chinese fishing boat holding thousands of sharks illegally fished from waters in the Galapagos Marine Reserve on August 13. On Monday, the fishermen were sentenced to up to four years in prison. Photo by Ecuadorian Minister of the Environment

Aug. 30 (UPI) -- An Ecuadorean judge sentenced 20 Chinese fisherman Monday to up to four years in prison and fined them more than $5 million for illegally fishing more than 6,000 sharks in the Galápagos Marine Reserve, where fishing is strictly prohibited.

The sentence was praised by Ecuadorean environmental officials, who have condemned the ongoing illegal fishing in waters near the Galapagos Islands.

"The sentence marks a milestone in regional environmental law and an opportunity to survive for migratory species," the Ecuador's Ministry of Environment said in an official statement.

"Zero tolerance for environmental crimes!" tweeted Tarsicio Granizo, the Environment Minister of Ecuador, after the judgment was announced.

Ecuadorean officials have used the arrest to push the Chinese government to do more about illegal fishing vessels originating from China. But China has pressed back against the conviction of the fishermen.

Chinese Foreign Ministry spokeswoman Hua Chunying said at a press conference Tuesday that they do not condone illegal fishing, but were investigating the Galapagos incident before making a final determination on the guilt of the fisherman.

"Judging from the information gleaned from the two sides, there has been no evidence proving that the vessel was engaged in fishing and transporting in the Ecuadorean waters," she said.

The Chinese fisherman aboard the Fu Yuan Yu Leng 999 were arrested in Ecuadorian waters on August 13 with more than 300 tons of sharks and other sea creatures caught in the Galápagos Marine Reserve waters in what has been described as the biggest illegal catch ever intercepted by the Ecuadorean government.

"There were thousands, if not tens of thousands, of sharks," marine ecologist Pelayo Salinas, told National Geographic at the time of the arrest. "This is going to be historic. The biggest seizure of sharks in the history of the Galápagos, for sure."

World News // 1 hour ago
Greta Thunberg, activists in 70 nations call for urgent action against climate change
Sept. 24 (UPI) -- Fridays for Future, an environmental movement for action to fight climate change, organized rallies in dozens of countries on Friday in the first mass event for the cause since the COVID-19 pandemic began.

World News // 2 hours ago
Lava from La Palma eruption has burned almost 400 structures so far
Sept. 24 (UPI) -- Slow-moving lava from a volcano on La Palma in the Canary Islands has so far destroyed close to 400 structures this week and 500 acres, authorities said in an update Friday.

World News // 19 hours ago
Sam becomes 7th hurricane of 2021 Atlantic season, could impact U.S.
Sept. 24 (UPI) -- Tropical Storm Sam has strengthened into a hurricane in the Atlantic and is projected to become a major hurricane in the coming days, forecasters said Friday.

World News // 7 hours ago
Kim Yo Jong, sister of Kim Jong Un, says North Korea open to dialogue with South
SEOUL, Sept. 24 (UPI) -- Kim Yo Jong, sister of leader Kim Jong Un, is calling the prospect of an end-of-war declaration on the peninsula "an admirable idea," and signaled that Pyongyang is open to dialogue if Seoul drops its "hostile" policies.

World News // 17 hours ago
Report: Britain paid compensation for nearly 300 Afghan civilian deaths
Sept. 23 (UPI) -- The British government paid $944,348 in compensation for the deaths of 86 children and 203 adult civilians at the hands of British forces in Afghanistan, according to a report released Thursday.