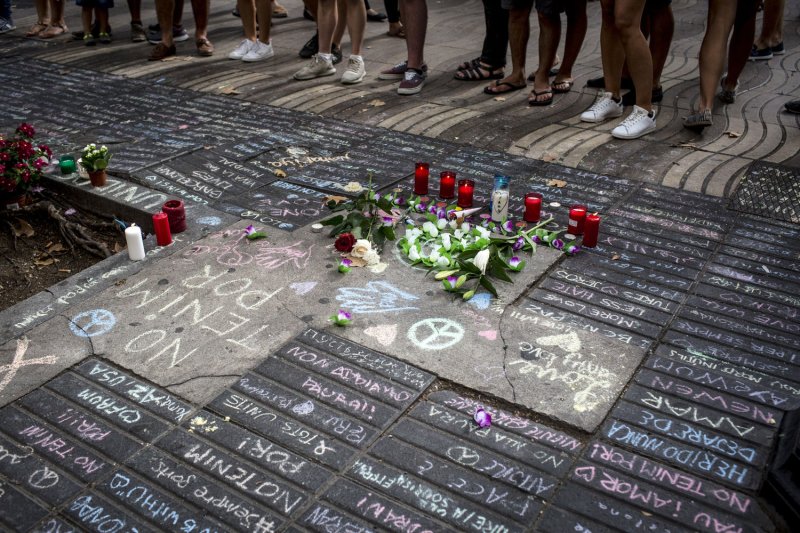 Messages are written on a sidewalk at Las Ramblas in Barcelona, Spain on August 19, two days after a van plowed into a crowd of people. Police say the death toll in the attack has risen to 15. Photo by Angel Garcia/UPI | License Photo

Police said Younes Abouyaaqoub, the purported driver of the van that rammed into a crowd of people in a Barcelona tourist district, was finally located in the Subirats neighborhood of Barcelona on Monday. His discovery followed days of a massive manhunt across Western Europe.

"We confirm that the man shot down in Subirats is Younes Abouyaaqoub, author of the terrorist attack in Barcelona," Catalonia's Mossos d'Esquadra security agency said.

Some witnesses reported that Abouyaaqoub was wearing a suicide belt -- but could not detonate it -- when he was shot.

Authorities had searched for Abouyaaquoub, a Moroccan national, for four days following the attack on Thursday. Investigators say he allegedly drove the van into a crowd in Barcelona's busy La Rambla area and fled on foot.

The manhunt spread across Europe prior to his fatal shooting.

Abouyaaquoub, 22, previously evaded capture when he rammed his way through a police checkpoint in a stolen vehicle an hour after the attack, Catalan police said.

Police said Abouyaaquoub sped off with the car's owner, Pau Perez, still inside. Perez's body was later found in the vehicle with stab wounds, making him the 15th person to die in the sequence of attacks.

Thirteen people died in the first attack in Barcelona and one died during a second strike in Cambril, where police killed five suspects as they attempted to flee.

Photographs of Abouyaaquoub were posted on social media sites by the Mossos d'Esquadro, the Catalonian police force, with the message, "He is dangerous and could be armed. He is sought as the alleged perpetrator of the Barcelona attack on August 17. He was the van driver."

The investigation has also concentrated on a building explosion in Alcanar, near Barcelona, the day before the car-ramming attacks. Police believe explosives manufactured there were likely to have been planned for an attack.

Among those killed in the blast was a Muslim cleric, Abdelbakr El-Satty, who authorities regard as a possible link in the Barcelona plot.

World News // 15 hours ago
Doubts surface over hydrogen as an energy and heating source
Sept. 27 (UPI) -- Hydrogen is emerging as an alternative to conventional fossil fuels such as natural gas, but it may not be as suitable as advocates expect.

World News // 1 day ago
North Korea says U.S. joint naval drills may lead to 'brink of war'
SEOUL, Sept. 27 (UPI) -- North Korea's ambassador to the United Nations blamed the "growing hostility" of the United States for his regime's nuclear weapons and warned that U.S.-South Korea naval exercises could lead to the "brink of war."