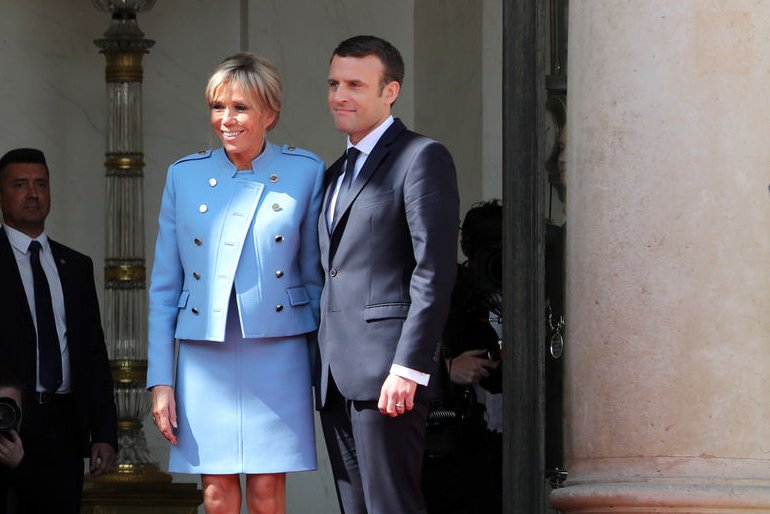 France's new president Emmanuel Macron poses with his wife, Brigitte, on the steps of the Elysee Palace in Paris. French voters have largely opposed a plan by Macron to issue his wife official job duties and a staff budget. Photo by Maya Vidon-White/UPI | License Photo

Aug. 11 (UPI) -- More than 300,000 people signed a petition to put plans on hold by French President Emmanuel Macron to create a formal first lady-type role for his wife, Brigitte.

Macron's office said the proposal was meant for transparency and that Brigitte Macron would not draw a public salary. Instead, the proposal would have spelled out how much staff she was allotted and a description of formal job duties.

Like in U.S. politics, the job of a first lady is not a defined role in France, though unlike in U.S elections, candidate spouses do not typically appear on the campaign trail. Brigitte Macron broke that mold and was a regular presence alongside with her husband during the race.

A spokesman for Macron said the president had not formally decided to drop the issue of creating official job duties and resources for the first lady. In a Twitter post, the spokesman said: "No changes to the constitution, no new system, no salary for Brigitte Macron." He accused the president's rivals of "hypocrisy."

The attempt to formalize her role in her husband's administration was met with hesitation by the French people after a campaign where another candidate's spouse found herself in hot water.

Francois Fillon, the early favorite to win this year's election, saw his campaign derailed when it was revealed his wife and other members of his family had been drawing lucrative government salaries for no-show jobs.

Previous French presidents have been no stranger to scandal involving their romantic endeavors. Macron's immediate predecessor Francois Hollande entered the presidency technically as a bachelor, but accompanied by his girlfriend, Valerie Trierweiler. She broke off the relationship while Hollande was in office when it became public that Hollande had been cheating on Trierweiler with the actress Julie Gayet.

Prior to that, former President Nicholas Sarkozy became the first French president to divorce his wife while in office. He split with his first wife Cecelia and later remarried supermodel Carla Bruni.

The biggest scandal involving a French president was Francois Mitterand, who served in the 1980s. It was revealed Mitterand had kept a secret second family after he fathered a child with his longtime mistress while in office. The family lived in a state-owned apartment while he was president.

World News // 50 minutes ago
More than 100 killed by landslide at rainy Myanmar jade mine
July 2 (UPI) -- A large landslide at a jade mining site in northern Myanmar Thursday killed at least 113 people and left the fate of dozens more unknown, authorities said.

World News // 5 hours ago
Russians vote to allow Putin to rule until 2036
July 2 (UPI) -- Russians overwhelming voted to pass constitutional amendments that could allow President Vladimir Putin to remain in power until 2036, according to preliminary results released Thursday.

World News // 17 hours ago
British fugitive Mark Liscott captured in Amsterdam
July 1 (UPI) -- One of Britain's most notorious fugitives who had been on the run for almost eight years was arrested by local authorities in the Netherlands last month, Amsterdam police said Wednesday.