Chairman of the Presidium of the Supreme Assembly of North Korea Kim Yong Nam left Pyongyang on Monday to attend the upcoming inauguration ceremony for Iranian President Hassan Rouhani, according to Pyongyang's state media. File Photo by Miguel Gutierrez/EPA

Aug. 1 (UPI) -- A top North Korean politician recently left Pyongyang for a 10-day trip to Iran, a country that may still be cooperating militarily with the Kim Jong Un regime.

Members of North Korea's army, navy and air force, as well as reserve forces, took part in a farewell ceremony for Kim at the main international airport in Pyongyang, as did top official Ri Kil Song and Iran's ambassador to North Korea, according to the Rodong.

Kim is expected to travel to Iran after refueling in Russia.

The North Korean official is expected to stay in Iran for about 10 days, South Korean news service Newsis reported.

The two sides are expected to discuss issues of joint concern, including stronger U.S. sanctions against both countries in the wake of recent tensions.

Analysts have previously said North Korea and Iran may be cooperating on weapons, after the Iranian military conducted a missile test from a submarine similar to a North Korean Yono-class submersible craft. 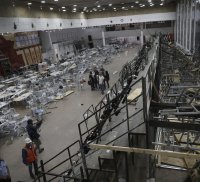 World News // 3 hours ago
Two dead, more than 100 hurt in bleachers' collapse at Israeli synagogue
May 16 (UPI) -- At least two people were killed and 167 were injured after bleachers collapsed at a crowded synagogue in the town of Givat Ze'ev on Sunday.

World News // 5 hours ago
COVID-19 worldwide deaths decline 12%, cases 4% in past week
May 16 (UPI) -- Coronavirus deaths and cases are stabilizing throughout the world with the exception of India where nearly 27,000 people have died and 2.7 million more become became infected.

World News // 9 hours ago
Coronavirus surging in India with 400,000 daily cases, 4,000 deaths
May 9 (UPI) -- Coronavirus is continuing to surge in India as daily cases surpassed 400,000 on May 9 for the fourth day in a row and deaths were above 4,000 for back-to-back days in the nation as the pandemic is subsiding elsewhere in the aftermath of restrictions and ramped-up vaccines. 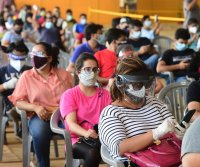