In Georgia, Pence says Trump will back toughened sanctions on Russia 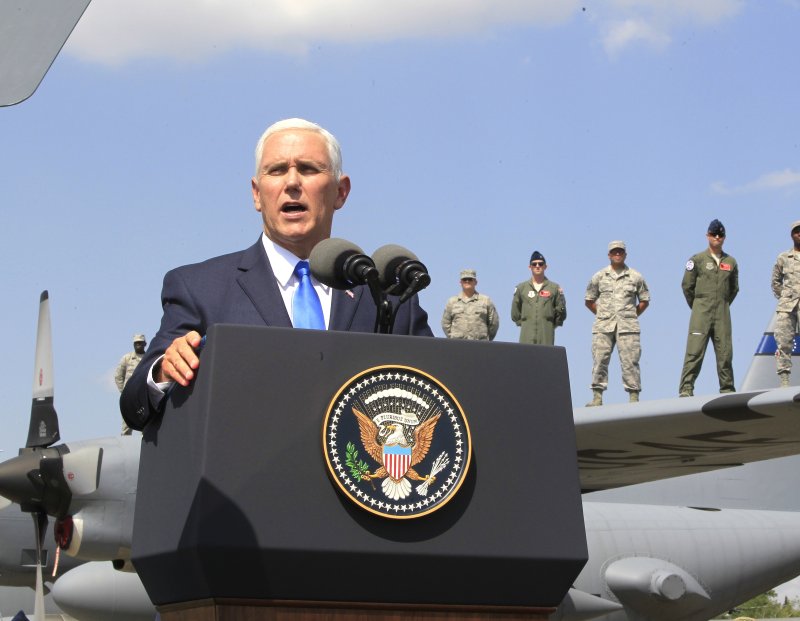 Georgia, which fought a brief war with Russia in 2008, is among Eastern European nations that feel threatened by the Russian regime, which annexed Crimea from Ukraine in 2014. That aggression led to existing U.S. sanctions against the Kremlin, which Congress moved to strengthen last week.

"At this very moment, just 40 miles from where we stand, Russian tanks stand on occupied territory in South Ossetia," Pence said at a joint news conference in Tbilisi Tuesday, the Georgian capital, with Prime Minister Giorgi Kvirikashvili. "Today, Russia continues to occupy one-fifth of Georgian territory.

"So to be clear: The United States of America strongly condemns Russia's occupation on Georgia's soil."

On Monday, Pence met with the presidents of three NATO countries -- Estonia, Latvia and Lithuania -- and said "an attack on one of us is an attack on us all."

The three Baltic nations, along with Georgia, were all occupied for nearly five decades by Soviet troops before regaining independence after the collapse of the Soviet Union in 1991.

"America first does not mean America only," Pence said. "We are here to tell our friends in Georgia, we are with you. We stand with you and will stand with you as you pursue membership in NATO."

Pence said Trump will sign legislation to "strengthen and codify" U.S. sanctions against Russia. The proposal, overwhelmingly approved by the House and Senate, bars Trump from easing or waiving penalties on Russia unless Congress agrees.

Pence said that legislation "improved significantly" when it moved through Congress, and added the sanctions are stronger but are "giving the president of the United States and our State Department the ability and the flexibility to be able to administer American foreign policy as appropriate."

"As always, our country prefers a constructive relationship with Russia based on cooperation and common interests," Pence said Tuesday. "But the president and our Congress are unified in our message to Russia: A better relationship, the lifting of sanctions will require Russia to reverse the actions that caused sanctions to be imposed in the first place.

"We hope for better days, and we hope for better relations with Russia, but the recent diplomatic action taken by Moscow I can assure will not deter the commitment of the United States to our security, to that of our allies, and to freedom-loving nations around the world like Georgia."

Besides working with Georgia "to reduce your vulnerabilities and counter Russian aggression," the vice president said the United States wants to work with the nation "to deepen our ties of commerce."

World News // 50 minutes ago
Ethiopian military has 'completed and ceased' operations in Tigray
Nov. 28 (UPI) -- Ethiopia's military launched an assault in the capital of the Tigray region in the northern part of the country Saturday.