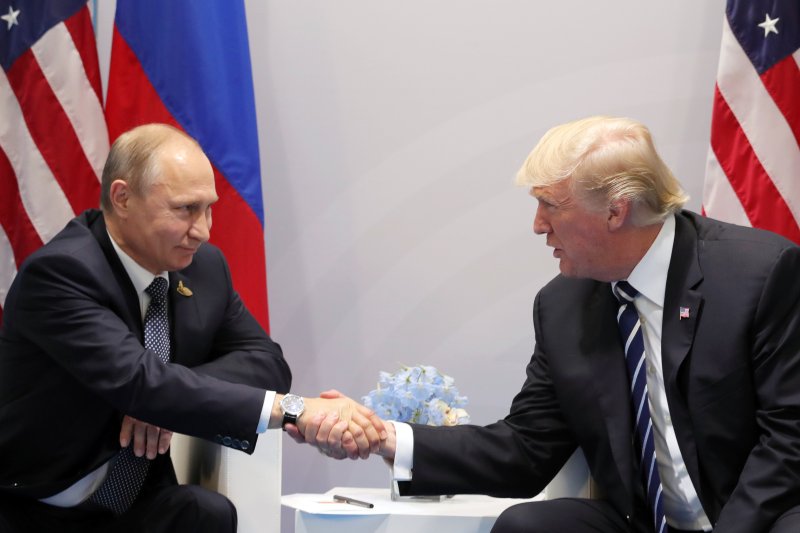 Russian President Vladimir Putin (L) and U.S. President Donald J. Trump (R) shake hands during a meeting on the sidelines of the G20 summit in Hamburg, Germany, on July 7. On Sunday, Putin announced that the United States must reduce embassy and consulate personnel by 775. Photo by Michael Klimentyev/EPA/Kremlin Pool

July 30 (UPI) -- Russian President Vladimir Putin on Sunday said that the United States must reduce it diplomatic personnel by 755 after the U.S. Congress approved additional sanctions on his country.

On Friday, the Russian Foreign Ministry demanded that the U.S. cut its diplomatic staff in Russia and said it would seize two U.S. diplomatic properties: cottages just outside Moscow's city center and a warehouse facility in Moscow.

On Sunday, Putin gave details, cutting the U.S. diplomatic personnel in his country to 455 by Sept. 1 -- same number the United States approved for Russian staff. Besides the embassy in Moscow, the U.S. maintain consulates in St. Petersburg, Vladivostock and Yekaterinburg.

"The American side has made a move which, it is important to note, hasn't been provoked by anything, to worsen Russian-U.S. relations. [It includes] unlawful restrictions, attempts to influence other states of the world, including our allies, who are interested in developing and keeping relations with Russia," Putin told Rossiya 1 TV channel host Vladimir Solovyov.

"We've been waiting for quite a long time that maybe something would change for the better, we had hopes that the situation would change. But it looks like, it's not going to change in the near future. ... I decided that it is time for us to show that we will not leave anything unanswered."

On Friday, the White House said President Donald Trump would sign the legislation because of "its responsiveness to his negotiations" before it cleared Congress. The president faced a veto-proof majority supporting the legislation in Congress.

The Russian leader said there are several "important spheres of cooperation" between Moscow and Washington, which he hoped would not suffer because of America's anti-Russian policies. They include the joint fight against terrorism, obligations in nuclear arms control and space projects.

"I have already told that, we have repeatedly invited the American side to arrange cooperation to secure out interests, both Russia's and the United States' and global, and to establish control over such negative activities as cyber crime," he said. "Instead of making concrete steps to begin constructive cooperation, we only hear ungrounded accusations of meddling in the United States' domestic affairs."

Putin had suggested cooperation with cybersecurity during his meeting with Trump on July on the sidelines of the G20 summit in Hamburg, Germany -- despite U.S. intelligence agreement Russian hacked into Democratic National Committee computers.

Trump had posted on Twitter they discussed "forming an impenetrable Cyber Security unit so that election hacking, & many other negative things, will be guarded," but that idea was criticized by Republicans and Democrats.

Current embassy figures in Moscow were not available. But many of the diplomatic staff are not Americans -- meaning they won't be forced to leave the country. In 2013, 333 were U.S. nationals and 867 were foreign nationals, including support staff.

President Barack Obama's administration imposed sanctions against Russia in December for meddling in the U.S. election last year and for its aggression in Ukraine. Obama expelled 35 Russian diplomats and closed Russian compounds in Maryland and New York. Most of the expulsions were suspected of links to spying.

On July 9, Trump posted on Twitter: Sanctions were not discussed at my meeting with President Putin. Nothing will be done until the Ukrainian & Syrian problems are solved!"

White House deputy press secretary Sarah Huckabee Sanders in the media briefing the next day "My understanding is the president's tweet was referencing sanctions regarding Ukraine and Syria. My comment was on sanctions regarding election meddling," Sanders said later, when asked for clarification.

Former FBI director Robert Mueller, serving as special counsel, is investigating allegations of collusion between Trump's campaign and Russia in the run-up to the 2016 presidential election. The allegations are also being investigated by Congress.

World News // 19 hours ago
Thousands of Haitian migrants gather at border bridge between Texas, Mexico
Sept. 16 (UPI) -- Thousands of asylum-seeking migrants -- most of them from Haiti -- are waiting under an international bridge in Del Rio to be processed to enter the country.