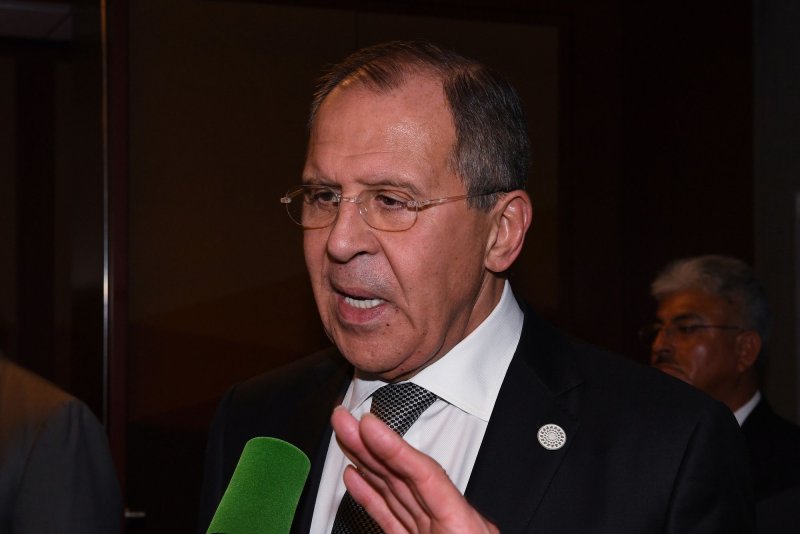 The Russian Foreign Ministry, led by Sergey Lavrov, ordered a reduction of U.S. diplomatic personnel in Russia on Friday, saying the move is a response to new sanctions from Congress. File Photo by Mark Ralston/UPI | License Photo

July 28 (UPI) -- Russia ordered a reduction in U.S. diplomatic staff in Moscow and other cities on Friday, and may seize U.S. properties -- in response to new sanctions from Congress.

A Russian Foreign Ministry statement requested the U.S. embassy in Moscow and American consulates in St. Petersburg, Yekaterinburg and Vladivostok to reduce its personnel to about 455 in total -- approximately the number of Russian diplomatic staff in the United States.

"This measure is further proof of the Unites States' extremely hostile foreign policy," the foreign ministry said in a statement. "Hiding behind its sense of superiority, the United States arrogantly ignores the stances and interests of other countries."

The ministry also said it would seize a Moscow warehouse and a country home in the suburb of Serebryany Bor that are used by the U.S. embassy.

The actions are similar to the December 2016 expulsion of Kremlin diplomats from the United States and the seizure of two of Moscow's diplomatic compounds in retaliation for Russian interference in the U.S. presidential election. At the time, the Russian foreign ministry recommended that President Vladimir Putin provide a response, but Putin chose to wait in an apparent attempt to build trust with then-incoming President Donald Trump -- a move that Trump lauded.

"Relations with Russia are being dragged down by political infighting in the United States," the foreign ministry added. "Despite Washington's constant outbursts, we have adhered to responsible and reserved behavior and have not responded to express provocations until now. However, the latest events confirm that certain circles in the U.S. are fixated on Russophobia and open confrontation with our country."

The ministry specified that the actions are in response to a vote Thursday in the U.S. Senate which imposed harsher economic sanctions against Russia. The Senate voted 98-2 to pass the bill and send it to Trump's desk. Two days earlier, the House of Representatives passed the legislation by a 419-3 vote.

World News // 10 hours ago
Australia, New Zealand, Japan deliver aid to Tonga in wake of volcano
Jan. 22 (UPI) -- Australia has delivered aid amid a shortage of drinking water in Tonga in the wake of a 4-foot tsunami after an underwater volcano exploded last week.

World News // 10 hours ago
Saudi-led coalition denies targeting prison in Yemen airstrikes
Jan. 22 (UPI) -- A coalition led by Saudi Arabia on Saturday denied allegations by the Houthi militia in Yemen that it was responsible for a series of airstrikes that killed dozens of people.

World News // 15 hours ago
U.S. delivers 'lethal' aid to Ukraine
Jan. 22 (UPI) -- The U.S. government delivered "lethal" aid to Ukraine as part of the first shipment of security assistance to defend against possible a Russian invasion, the U.S. Embassy in Kiev said.