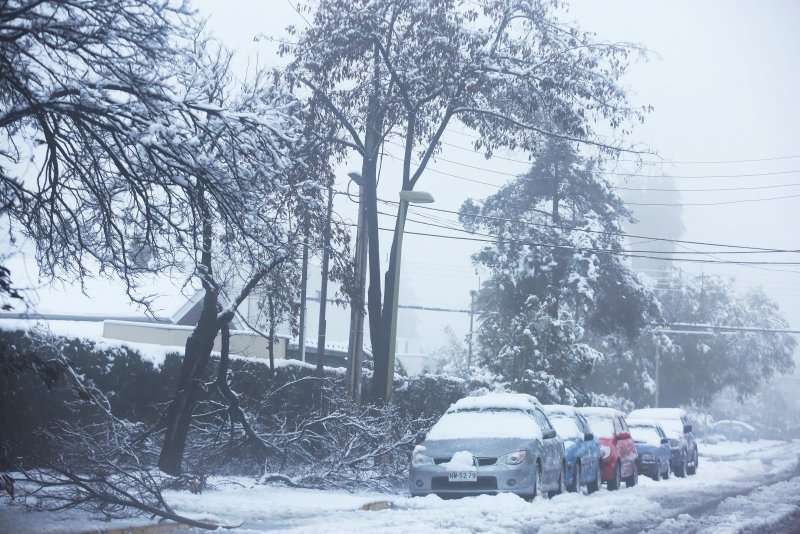 Vehicles on a street in Chile's capital of Santiago were covered in snow on Saturday due to a rare snowfall. Photo by Elvis Gonzalez/EPA

Chile's Ministry of Interior and Public Safety on Saturday said one person died while trying to clear ice, while two others were injured by a power line that fell. Most blackouts were caused by trees falling onto power cables due to the weight of the snow.

Local meteorologists said it is the heaviest snowfall in Santiago since 2007, El Mercurio reported.

"It is true: In Santiago it is snowing. Take the necessary safeguards -- remember that the streets and sidewalks have less grip," Chile's national police force, called the Carabineros de Chile, said in a statement.

"Caution in driving. Santiago is not ready for snow driving. If you can, avoid leaving -- do it, and don't risk yourself," the agency said in a statement.

As the snow began falling on Friday, Chile's government said it is working to address the effects of climate change.

"Climate change is one of the greatest challenges of our time. We have witnessed the ways in which this phenomenon threatens the well-being and development of the planet: unpredictable weather patterns, rising sea levels, flood risks and unexpected floods are just a few of its effects reaching an unprecedented scale each year," the Chilean government said in a statement.

World News // 16 hours ago
Spain returns paintings stolen during WWII to Poland
Jan. 28 (UPI) -- The Spanish government has returned two paintings to Poland which were stolen during World War II, as the Metropolitan Museum of Art in New York City returned dozens of artifacts looted from Italy.

World News // 17 hours ago
Assad regime behind 2018 chlorine attack in Syria, OPCW report finds
Jan. 27 (UPI) -- The Organization for the Prohibition of Chemical Weapons Incident Identification Team has determined that the Assad regime used Chlorine as a chemical weapon on April 7, 2018, in the Damascus suburb of Douma.

World News // 19 hours ago
Myanmar junta slaps strict election regulations on political parties
Jan. 28 (UPI) -- The military junta that has ruled Myanmar since a 2021 coup has released a 20-page document detailing an extensive list of regulations for political parties who wish to run in future elections.