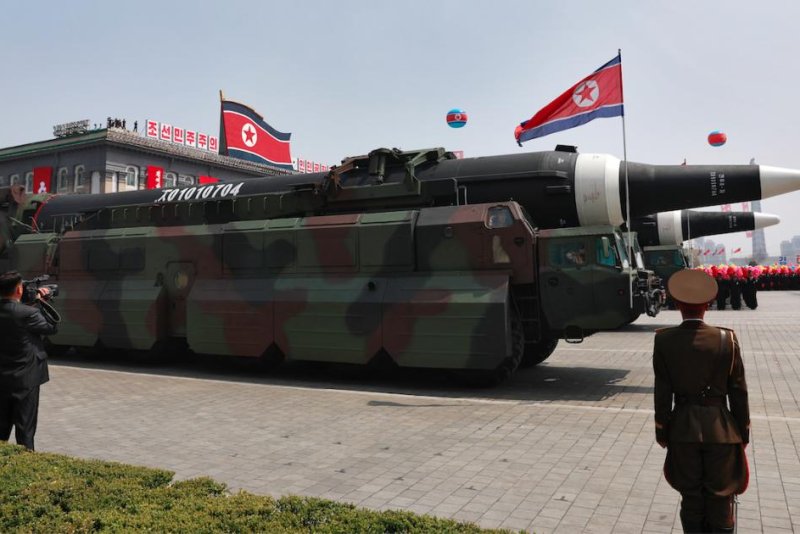 July 14 (UPI) -- North Korea is demanding the United States remove all its weapons from the South.

The call for diminished U.S. military presence comes at a time when Pyongyang may have been reprocessing an "undetermined" amount of plutonium at its Yongbyon nuclear facility, according to U.S. analysts.

According to the committee's spokesman, the United States announced the decision to deploy tactical nuclear weapons on Jan. 29, 1957, and more than 1,720 tactical nukes were in the South until the mid-1980s.

The United States did deploy tactical nuclear weapons in 1957, but the total number was close to 700, according to Yonhap.

All the weapons were removed from the peninsula in 1991, but North Korea claimed the United States continues to deploy strategic nuclear assets in the statement issued Saturday, local time.

"Those who heighten the crisis of war should reflect on their sins," the North Korean committee said. "All war equipment, including U.S. invading forces and nuclear weapons in South Korea must be withdrawn."

Pyongyang's demands come at a time when the country continues to show no interest in denuclearization.

U.S. analysts writing on 38 North, a Johns Hopkins University website dedicated to North Korea issues, state the radiochemical laboratory at Yongbyon has been the site of "at least two unreported reprocessing campaigns to produce an undetermined amount of plutonium that can further increase North Korea's nuclear weapons stockpile."

World News // 2 hours ago
India Supreme Court orders panel to investigate Pegasus spyware scandal
Oct. 27 (UPI) -- India's Supreme Court created an independent committee on Wednesday to investigate accusations that spyware that was sold to the government was used to illegally monitor the phones of lawmakers and activists.

World News // 9 hours ago
PM Abdalla Hamdok, wife released under 'heavy guard' after Sudan coup
Oct. 27 (UPI) -- Sudanese Prime Minister Abdalla Hamdok and his wife have been released following their arrests on Monday by the military in a coup.

World News // 20 hours ago
Fuel price surge hits Lebanon, worsening struggle for food, transport
BEIRUT, Lebanon, Oct. 26 (UPI) -- A new spike in fuel prices in Lebanon is spurred by the inability of the central bank to provide hard currency for fuel imports, the national currency in free-fall again and the rise in global oil prices.