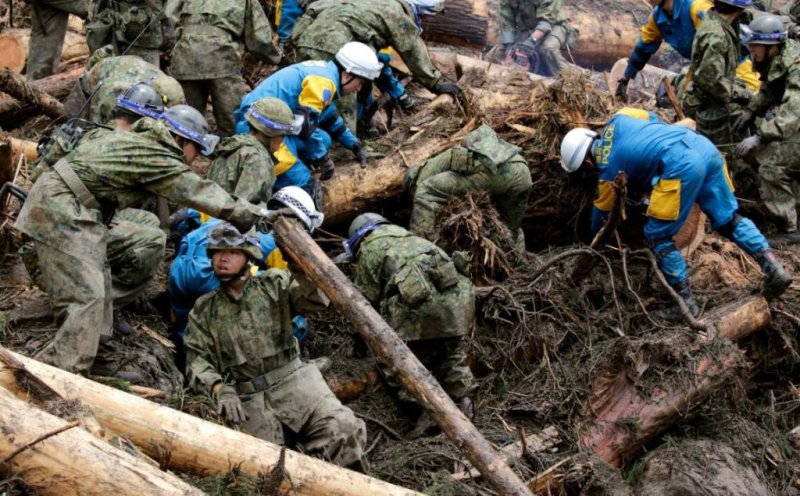 July 10 (UPI) -- At least 21 people died and at least 20 are missing in flooding and landslides on Japan's Kyushu island after last week's rains, local governments reported.

A historic rainfall at the southern tip of Japan, beginning on Wednesday, prompted landslides and flooding. More than 2,000 members of Japan's Self-Defense Forces are working with firefighters, police and rescue workers in Fukuoka prefecture's Asakura area, one of the hardest-hit areas.

About 180 people, some elderly, were stranded by the flooding, and 1,700 were brought to evacuation centers.

Thirteen people were confirmed dead in the city of Asakura. The Fukuoka prefecture government said it was unable to contact 25 people in the city.

The Japan Meteorological Agency warned that southwestern Japan may see more heavy rain, which could lead to additional mudslides.

Police are investigating the discovery of five bodies in the Airake Sea, miles from the flooding, on Saturday. They theorize the bodies were washed downstream by the Chikugo River, which flows into the sea and is in the epicenter of the flooding.

Schools in the area cut their semesters short by about 10 days and began summer vacations so students could help with recovery efforts.

World News // 4 hours ago
European Union agrees to ban products tied to deforestation
Dec. 6 (UPI) -- The European Union on Tuesday provisionally agreed to a new law that would ban importing products connected with deforestation, a win for environmentalists.

World News // 7 hours ago
Al Jazeera asks for ICC to investigate Abu Akleh's death
Dec. 6 (UPI) -- The Al Jazeera Media Network said it officially filed a request to the International Criminal Court to conduct an investigation and prosecution of those responsible for the death of its journalist Shireen Abu Akleh in th

World News // 9 hours ago
Russia ramps up missile attacks on Ukraine after airfields hit
Dec. 6 (UPI) -- Russia slammed Ukraine with another barrage of missiles Monday night into Tuesday, hitting electrical plants and other civilian infrastructure facilities as another explosion hit a Russian airfield.