China may be easing some sanctions against South Korean firms following the election of Moon Jae-in. Photo by Yonhap News Agency/UPI

May 16 (UPI) -- China may be taking steps to coax Seoul to rethink the deployment of THAAD, the U.S. missile defense system that is already operational in central South Korea.

The Chinese website of Lotte Mart, a retailer belonging to the same South Korean firm that owns the golf course where THAAD is deployed, was up and running after an unexpected shutdown suspended all online commerce in March, Yonhap reported Tuesday.

The resumption of online activity after weeks of suspected sanctions follows South Korea's presidential elections and a meeting between South Korean and Chinese officials on the sidelines of the Belt and Road Forum in Beijing.

Dozens of Lotte Mart outlets, however, remain closed, according to the report.

Seoul's Moon Jae-in said the accelerated deployment of THAAD would come under review during his presidency, a proposal that China welcomes because of its strong opposition to THAAD and its surveillance capabilities.

But a review of THAAD that culminates in cancellation is not likely, according to reports.

South Korea's defense minister told lawmakers in Seoul on Tuesday there are no plans to change the military's position on THAAD, News 1 reported.

"Since THAAD is a weapons system designed to make a great contribution to our security, I do not expect the [new administration] will change the decision," the minister said.

On Tuesday, Matt Pottinger, the senior director for East Asia at the White House National Security Council, said there is no change in the U.S. position on THAAD.

But hopes are high in Beijing South Korea's new administration will have something new to offer.

North Korea's recent missile test may have drawn the ire of Beijing and China may have imposed new sanctions, including the cancellation of flights between Dandong, China and Pyongyang, according to South Korea's No Cut News.

World News // 7 hours ago
Russian authorities arrest 5 in connection with deadly coal mine disaster
Nov. 27 (UPI) -- Authorities have arrested five people on charges related to negligence in a Russian coal mine disaster that left more than 50 people dead. 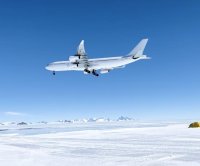