Pakistan authorities sealed the border crossing with Afghanistan for the third day Sunday after clashes erupted between Pakistani and Afghan troops, in Chaman, Pakistan. Pakistan said 50 Afghan border troops were killed but Afghanistan said it was two. Photo by Akhter Gulfam/EPA

May 8 (UPI) -- Pakistan said its forces killed more than 50 Afghan soldiers along their disputed border, but Afghanistan said two died.

The clashes took place Friday at the Chaman border, which divides Pakistan's southwest Balochistan province and Afghanistan's southern Kandahar. Pakistani officials said they were carrying out a census count.

Originally, Pakistan said 13 people were killed, including nine civilians from its country.

On Sunday, Pakistan increased the number of victims.

"We are not pleased to tell you that five Afghan check posts were completely destroyed -- more than 50 of their soldiers were killed and above 100 were wounded," Maj. Gen. Nadim Ahmad, head of the paramilitary Frontier Corps, said to reporters in Islamabad. "We are not happy for their losses, but we were forced to retaliate."

But Afghanistan said the figures were inflated.

Afghan envoy to Pakistan, Omar Zakhilwal, said two Afghan soldiers were killed and seven sustained injuries in the clash. He posted Monday on Twitter: "However, even two lives are too many if our claim for seeking good neighbourly relations is genuine & if we mean well for each other."

"Very false claims by Pakistani Frontier Corp that as many as 50 Afghan soldiers lost their lives in Pak retaliation; totally rejected," Sediq Sediqqi, a government spokesman, said Sunday on Twitter.

A spokesman for the Interior Ministry, which oversees the Afghan border police, said the number was "totally baseless".

The two sides also dispute how the clash began.

According to Pakistan, the fighting began when Afghan troops fired on Pakistani census workers. The Afghan government was notified and given the coordinates of the border villages, where the census workers were going door to door, Pakistan said.

They said Pakistani census enumerators -- accompanied by soldiers -- strayed across the border.

Afghanistan doesn't recognize the so-called Durand Line, which is 1,375 miles established more than a century ago when the British Empire controlled much of South Asia.

The border has remained closed since Friday and will remain so "until Afghanistan changes its behavior," senior Pakistan army general Amir Riaz told reporters.

World News // 5 hours ago
China decides not to sell tickets to public for Winter Olympics in Beijing
Jan. 17 (UPI) -- The Beijing Winter Olympics Organizing Committee announced Monday that tickets will not be sold to the public but will be distributed "exclusively" to residents of the country who meet strict COVID-19 requirements.

World News // 10 hours ago
Oxfam: Billionaires' wealth grew by $5T amid pandemic while 160M forced into poverty
Jan. 17 (UPI) -- The two years of the pandemic have exacerbated the gap between the haves and have nots with the world's billionaires seeing their fortunes balloon while more than 160 million people have been pushed into poverty.

World News // 23 hours ago
Ukraine blames Russia for cyberattack targeting government agencies
Jan. 16 (UPI) -- Microsoft on Saturday said it has discovered malware with the capability to erase data on computer systems of dozens of government, non-profit and information technology organizations based in Ukraine.

World News // 20 hours ago
Prince Harry seeking right to pay for police protection in Britain
Jan. 16 (UPI) -- Prince Harry is engaged in a legal challenge for the right to personally pay for protection from British police when visiting the country. 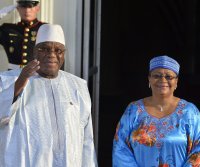