London police arrested three women on Monday, charging them with terrorism-related offenses. Their arrests are part of a roundup in what the Metropolitan Police said was the foiling of a terrorist plot, in which a man was arrested Thursday and a woman was shot. File Photo by Will Oliver/EPA

May 1 (UPI) -- London police announced the arrest Monday of three women in connection with an anti-terrorist operation in which one person was shot last week.

The three unidentified women, two aged 18 and one 19, were detained after a raid on a home by the London Police Counter-Terrorism Command, and questioned on suspicion of commission, preparation and instigation of terrorist acts.

The arrests in east London are connected to a counter-terrorism raid on a home on Thursday in which a woman was shot and a man was taken into custody. The woman, 21, was discharged Sunday from a hospital, and immediately arrested on terrorism charges.

A man, Mohamed Amoudi, 21, was arrested, and police later said he was questioned about his plans to travel to Syria and join the Islamic State.

Police also detained a man on Thursday near the Parliament building in London in what it called a "targeted and intelligence-led arrest." A bag of knives was found near him.

Six others were arrested in connection to Thursday's actions, bringing the total to 10, in what Metropolitan Police Deputy Assistant Commissioner Neil Basu confirmed was the blocking of an active terror plot.

World News // 5 hours ago
German bishops announce higher payments to Catholic abuse victims
Sept. 24 (UPI) -- A conference of German Catholic bishops introduced a new model on Thursday to pay survivors of abuse within the church, which could pay each more than $50,000.

World News // 5 hours ago
TikTok applies for Chinese license to export technology
Sept. 24 (UPI) -- TikTok's parent company, ByteDance, requested permission from Beijing to export its technology, as the company's executives work furiously to push through a deal with Oracle and Walmart before a November deadline. 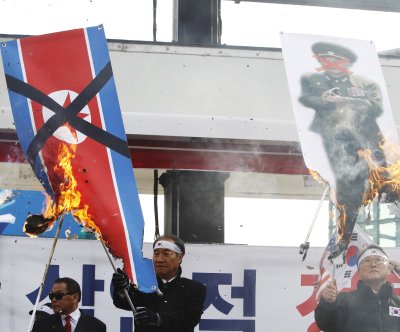