April 27 (UPI) -- The Iraqi Army on Thursday said security forces are four districts away from fully capturing Mosul from the control of the Islamic State.

The U.S.-led international coalition estimates there are less than 1,000 Islamic State militants remaining in Mosul. Iraqi forces are focused in an effort to take Mosul's Old City, where the Great Mosque of al-Nuri is located, from which Islamic State leader Abu Bakr al-Baghdadi is believed to have delivered a sermon in which he declared an Islamic State caliphate. Construction of the mosque was completed in the year 1172.

Also on Thursday, the Hashd al-Shaabi Shiite militia said it captured the town of Hazar, south of Mosul, away from Islamic State control. The militia said it began moving 5,000 people out of town.

Iraq launched its military offensive to retake western Mosul from the Islamic State, also known as Daesh, ISIL and ISIS, on Feb. 19. The offensive to retake Mosul began Oct. 17, led by Iraqi security forces and aided by the Kurdish Peshmerga, a Shiite-led militia, and the U.S.-led international coalition. Iraq fully captured east Mosul in late January.

The United Nation's International Organization for Migration in Iraq said last week that more than 331,000 people have been displaced from west Mosul since Feb. 25. Nearly half a million Iraqis have been displaced since the Mosul offensive began in October.

World News // 5 hours ago
2 dead after British-operated oil tanker attacked in Arabian Sea
July 30 (UPI) -- An oil tanker came under attack off the coast of Oman in the Arabian Sea and led to the deaths of two European crew members, officials said Friday.

World News // 8 hours ago
Japan extends COVID-19 emergency for Tokyo, covers 4 new areas
July 30 (UPI) -- The Japanese government on Friday extended a state of emergency in Tokyo and made the declaration for four additional prefectures due to spiking COVID-19 cases, aided by he Delta variant. 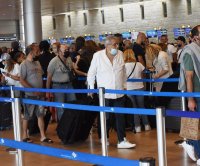