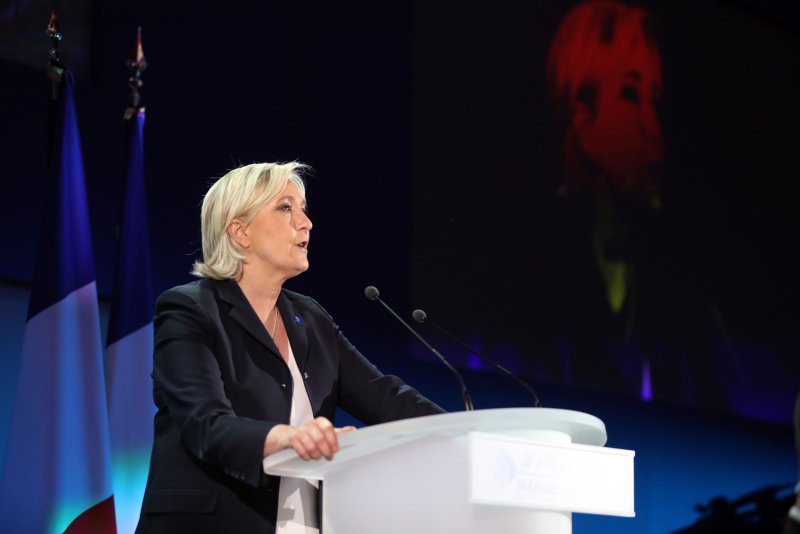 French presidential candidate Marine Le Pen, who will face off against Emmanuel Macron on May 7, on Monday said she was leaving her post as president of the far-right National Front political party in an effort to appeal to "all the French." Photo by Maya Vidon-White/UPI | License Photo

April 25 (UPI) -- French presidential contender Marine Le Pen said she is leaving her post as president of the far-right National Front Party to be a candidate for "all the French" ahead of a runoff election.

Le Pen will face off against Emmanuel Macron, a former banker and centrist independent, on May 7. After the first-round vote on Sunday, Le Pen in a statement on Monday condemned French political parties calling to unite against her and to support Macron.

Le Pen called the Republican Front mainstream party coalition that united against her "old and completely rotten." No rival French political party has yet endorsed Le Pen, who gained 21.3 percent of votes in the first round compared to Macron's 24 percent.

Later on Monday, Le Pen said she would leave her post as president of the National Front, but did not indicate for how long.

"I'm taking my leave of the presidency of the official National Front: I am only the candidate for the presidential election," Le Pen said in a statement.

During an interview with the France 2 television channel, Le Pen said she is not "disappointed" with the first round but she has hope that "we can win and we will win."

"Tonight, I am not the president of the National Front, I am the presidential candidate, the one who wants to gather all the French around a project of hope, of prosperity, of security," Le Pen said.

RELATED Accused Paris gunman previously threatened police, but not on any watch list

Le Pen and Macron will face off in a live televised debate on May 3. On Monday, polls in France showed about 60 percent of voters supported Macron, compared to less than 40 percent for Le Pen.

Marine Le Pen on immigration: 'Give us France back'

World News // 12 hours ago
Trial starts in Russia for WNBA star Brittney Griner
July 1 (UPI) -- The Moscow cannabis oil possession trial of WNBA player Brittney Griner began Friday, with Griner facing a possibility of up to 10 years in a Russian prison if convicted.

World News // 13 hours ago
Inflation jumps to record 8.6% in eurozone
July 1 (UPI) -- Inflation in the eurozone reached an annual rate of 8.6% in June, an increase from 8.1% in May, according to the latest European economic statistics released Friday.

World News // 14 hours ago
Former U.S. military base in South Korea to become green park in heart of Seoul
SEOUL, July 1 (UPI) -- For almost 120 years, Yongsan Garrison has been off-limits to South Korean civilians -- but now the walled compound in the heart of Seoul is turning into a public park that officials say will transform the city.

World News // 23 hours ago
Xi Jinping returns to Hong Kong for first trip outside of mainland China in two years
June 30 (UPI) -- Chinese President Xi Jinping traveled to Hong Kong on Thursday to mark the 25th anniversary of its return from British rule and to inaugurate the administration of its new chief executive, John Lee.