The UKIP is the "only political party committed to passing a law against th­e wearing of face cov­erings in public plac­es," UKIP deputy leader Peter Whittle said Monday at a news conference to detail the manifesto, which also targets another Muslim practice -- female genital mutilation.

"I don't believe you can integrate fully and enjoy the fruits of British society if you can't see people's faces," UKIP leader Paul Nuttall told the BBC on Sunday.

"I can't walk into a bank with a balaclava on or a crash helmet. If I can't do it and other people can't do it, I don't see why there are special interests for certain people."

Under the plan, the ban would impose a fine on violators. Nuttall said the proposal brings Britain in line with other European countries, including France, that prohibit the wearing of full-face veils.

Nuttall said the ban is necessary because "we have a heightened security risk at the moment" and for closed-circuit television to be successful "you need to see people's faces."

"I think there are certain circumstances where if it's a security issue -- maybe the airports, or public transport -- it's acceptable, but I'm not in favor of curtailing people's [freedoms]," he said on a BBC show.

In 2010, former UKIP leader Nigel Farage proposed a burqa ban in 2010 but the party later dropped the policy and it did not appear in its 2015 manifesto.

The manifesto seeks to stop female genital mutilation -- removing the external genitalia from young children. A total of 5,702 cases were reported in Britain from April 2015 to March 2016, according to the Health and Social Care Information Center.

The party promises "a zero-tolerance approach to unacceptable 'cultural' practices that include FGM."

UKIP said it will "introduce mandatory reporting of suspected cases of FGM for teachers, social workers, nurses, the police, etc., and include FGM awareness training into safeguarding training for teachers, school staff and governors."

World News // 1 hour ago
BTS member Jimin's 'unwashed' costume to go on auction
April 19 (UPI) -- A traditional Korean garment BTS band member Jimin wore during a performance on NBC's "The Tonight Show" is to be sold at a South Korean auction.

World News // 3 hours ago
Fires burn out of control for 2nd day in South African capital
April 19 (UPI) -- Authorities in South Africa said they have arrested a man who may be responsible for multiple fires that continue to burn Monday. 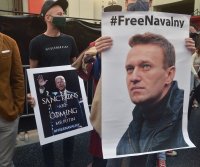