North Korea displayed new missiles during a military parade to celebrate the 105th birthday anniversary of Kim Il Sung on Saturday. Photo by How Hwee Young/EPA

April 15 (UPI) -- North Korea showed off a series of new and technologically advanced missiles and launchers during a military parade on Saturday.

No nuclear test or ballistic missile launch was conducted during the celebration of the 105th birthday of Kim Il Sung, the country's former supreme leader who died in 1994. He was the grandfather of the current leader, Kim Jong Un.

Two mobile canisters possibly containing ICMBs larger than anything North Korea has ever produced were shown, indicating North Korea may be working toward solid-fuel, canisterized ICBMs.

"They have an indigenous tank system now so they have more launchers, and they have solid fuel, which means they can launch a lot more of these things in quick succession without having to refuel," Melissa Hanham, an expert at California's James Martin Center for Nonproliferation Studies said.

She also noted the land-based KN-15 missile was mounted on a special launcher that increased its off-road capabilities.

The display came after North Korea warned of "full scale war" if the "U.S. nuclear-powered aircraft carrier fires a single bullet toward our territory." 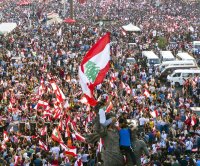