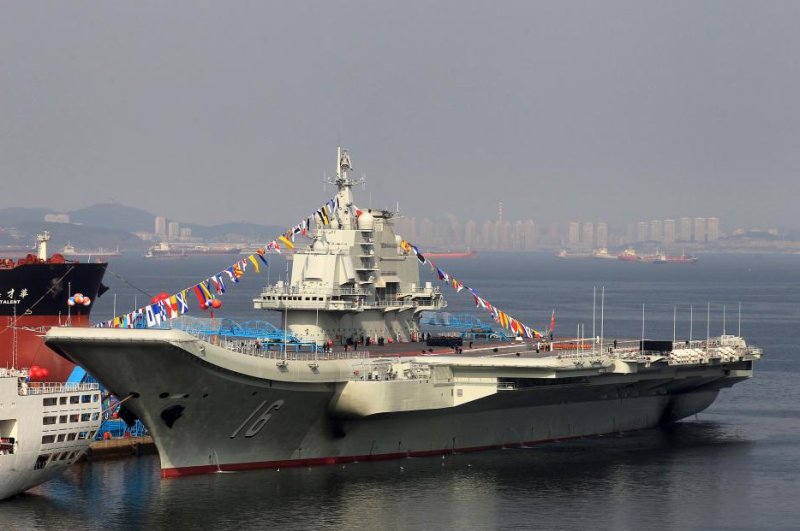 The Chinese navy deployed the aircraft carrier Liaoning during a training exercise near the Korean peninsula, according to state media. File Photo by John Lee/EPA

April 5 (UPI) -- China carried out a naval training exercise in the Yellow Sea ahead of the first summit between U.S. President Donald Trump and Chinese President Xi Jinping.

The training exercise involved the deployment of the Liaoning, China's only known aircraft carrier, the Global Times reported Wednesday.

Quoting a Chinese navy announcement on Weibo, the Chinese social network, state news media said the Liaoning left its station in Qingdao on March 20 and conducted "annual naval drills" in the Yellow and Bohai Seas, off the coast of northeastern China.

The Liaoning and its accompanying fleet had completed training exercises in the South China Sea in January, a move that prompted Taiwan to scramble military jets and a ship to monitor their movements.

China also deployed the Shenyang J-15, also known as the "Flying Shark," a carrier-based fighter jet most likely based on the Soviet-designed Sukhoi Su-33.

The Navy carried out tasks including midair refueling, aerial combat and target strikes during aircraft deployment.

A helicopter conducted night landing drills and search missions, according to the report.

Although the exercises took place in March, they are being made public this week, a day ahead of the first summit between China and the United States.

The drills took place near North Korea, a possible sign Beijing is getting its navy ready for any potential instability on the peninsula, South Korean news agency Yonhap reported.

RELATED North Korea tied to hacking of banks in 18 countries

The Chinese navy said the training was a regular occurrence and part of plans to connect the navy and the air force, and further advance "technical tactical and operational training."

World News // 18 hours ago
Hong Kong to hand out 500,000 air tickets to tempt visitors back
Feb. 3 (UPI) -- Hong Kong tourism authorities said Friday they would give away 500,000 free plane tickets and other prizes as part of a global promotion signaling the reopening of the city-state to visitors.

World News // 1 day ago
Britain to launch public inquiry into 1998 Omagh car bombing
Feb. 3 (UPI) -- The British government will launch an independent investigation into the Omagh car bombing that killed 29 people and injured hundreds more in Northern Ireland in August of 1998.
Advertisement