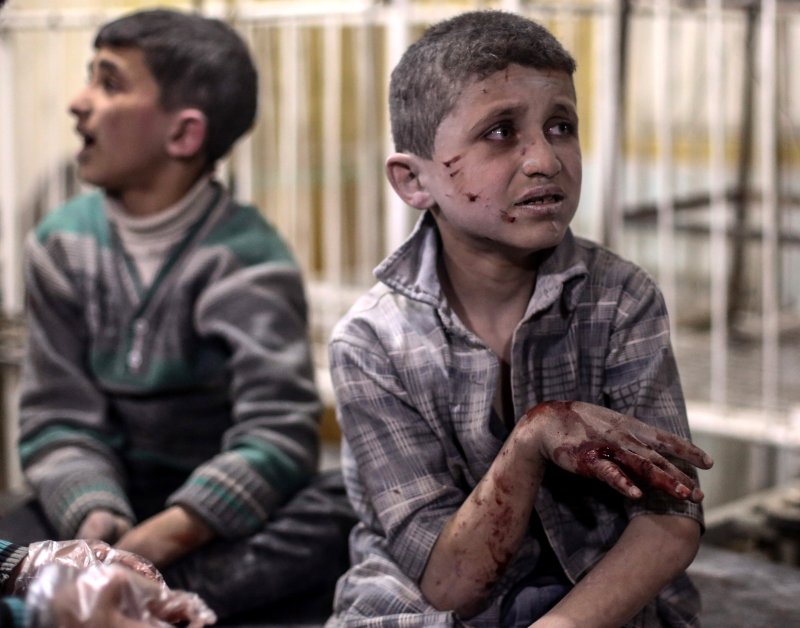 April 4 (UPI) -- The White House said the Syrian government was responsible for a chemical attack Tuesday that killed dozens of people and injured hundreds more in a rebel-held Syrian town. Hours later, one of the clinics treating victims was hit by an airstrike.

The Britain-based Syrian Observatory for Human Rights said at least 58 people died, including 11 children, in Khan Sheikhoun in the Idlib province and the "the death toll is expected to rise." Another 400 people were injured, the monitoring group said.

Some people in one of the neighborhoods bombed with chemicals suffocated and sustained other symptoms including iris shrinkage, intense breathing and general spasms.

The pro-rebel Edlib Media Center said the chemical used in the attack was the nerve agent sarin.

The Union of Medical Care and Relief Organizations said more than 100 were killed, including 25 children, during the airstrike that occurred around 6:30 a.m.

White House spokesman Sean Spicer called the attack "reprehensible" and "cannot be ignored by the civilized world." He told reporters "these heinous actions by the Bashar al-Assad regime are a consequence of the last administration's weakness and irresolution."

"President Obama said in 2012 that he would establish a 'red line,' against the use of chemical weapons and then did nothing," Spicer said.

Sen. John McCain, R-Ariz., who backs arming the Syrian rebels, said President Donald Trump's administration should be held just as accountable if the United States does nothing.

"I want to hear him say we're going to arm the Free Syrian Army," he said in a CNN interview. "We're going to dedicate ourselves to the removal of Bashar al-Assad. We're going to have the Russians pay a price for their engagement. All players here are going to have to pay a penalty and the United States of America is going to be on the side of people who fight for freedom."

The UK, the United Nations and France also condemned the attack.

The Syrian government denied involvement in the attack, instead blaming "armed terrorist organizations." The government said it is complying by an international Chemical Weapons Convention that bans such instruments of war, according to SANA, the Syrian state-run news agency.

"The Syrian Arab republic stresses that all those fabricated allegations will not prevent it from continuing its war on terrorism, their supporters and sponsors in Saudi Arabia, Turkey, Qatar and some of the EU countries, and from working for a political solution to the crisis in Syria, SANA reported.

The injured were treated at the clinic because the area's largest hospital was damaged by an airstrike two days earlier.

The Syrian Civil Defense volunteer rescue group, also known as the White Helmets, said said two of its centers were targeted, including one in Khan Sheikhoun, and put out of service by airstrikes on Tuesday. No volunteers were injured. SCD workers sprayed some chemical attack victims with water during rescue efforts.

Previously, the United Nations found that the Assad regime had used chemical weapons on civilians.

Turkey calls end to its military incursion in Syria

World News // 1 hour ago
Elian Gonzalez nominated for seat in Cuba's National Assembly
Feb. 8 (UPI) -- Elian Gonzalez garnered international attention as the 6-year-old Cuban boy at the center of a custody battle, but his next chapter could be as a lawmaker.

World News // 9 hours ago
China: Biden's SOTU comments 'not conducive to building trust' amid tensions
Feb. 8 (UPI) -- China's foreign ministry spokesperson Mao Ning hit back at President Joe Biden Wednesday for comments during his State of The Union address that she implied sought to drive division between the two countries.