April 3 (UPI) -- Christian churchgoers in China were recently wounded after fighting with officials enforcing new regulations: the installation of surveillance cameras inside churches.

The law comes two years after Chinese authorities ordered churches in the coastal province to remove conspicuous neon crosses from buildings, a movement that began in 2014, according to the report.

The Christian population in provinces like Zhejiang is growing, now numbering 1 million. In 2015, a conservative estimate placed the total number of Christians in China at 23 million.

In the city of Wenzhou, Christians vehemently opposed to camera surveillance clashed with authorities.

"Government officials came to the churches and put up cameras by force. Some pastors and worshipers who didn't agree to the move were dragged away," one unidentified Christian in Wenzhou said, referring to a recent clash. "Some people needed to be treated in a hospital after fighting the officials."

The price of resistance is high.

Huang Yizi, a pastor who was jailed in 2015 for standing up against the removal of crosses, said he is now being closely watched after telling foreign reporters of the camera installations in March.

According to China Aid, a U.S.-based religious rights group, churches were required to place cameras at church gates, rostrums and offering boxes.

RELATED U.N. Ambassador Haley: U.S. has 'no love' for Russia

"We Christians do good deeds and we don't do anything to endanger the public. I don't understand why the government wants to monitor us," one churchgoer said.

World News // 2 hours ago
Israel to transfer all travelers from abroad to quarantine facilities
April 1 (UPI) -- Israeli Prime Minister Benjamin Netanyahu on Wednesday mandated that all new arrivals to the country must be placed into quarantine.

World News // 2 hours ago
Taliban, Afghanistan prepare for prisoner swap
April 1 (UPI) -- Afghanistan and the Taliban will begin a long-awaited prisoner exchange this week, the Taliban and sources within the government said Wednesday.

World News // 4 hours ago
South Korea woman charged with baby's death after giving birth in restroom
April 1 (UPI) -- Police in South Korea arrested a woman after she gave birth in a public restroom then threw the newborn baby out a window, according to reports.

World News // 5 hours ago
Prince Charles: COVID-19 is 'strange,' 'frustrating' and 'distressing'
April 1 (UPI) -- After he himself picked up the coronavirus disease and is now in isolation, Britain's Prince Charles spoke publicly Wednesday for the first time since his diagnosis. 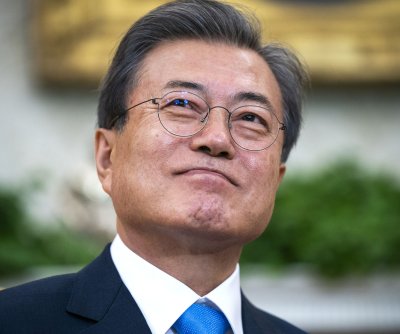 World News // 8 hours ago
South Korean companies calling workers back to office
SEOUL, April 1 (UPI) -- The South Korean government has warned people to keep up social distancing, but a growing number of companies are ordering employees back to the office as the number of new cases of coronavirus stabilizes.