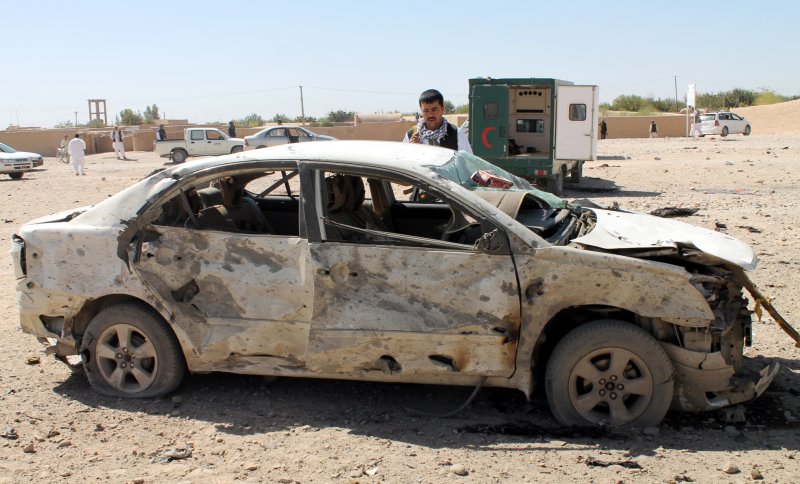 Afghan security officials inspect the scene of a suicide bomb attack October 10 at a police station in Lashkar Gah, the provincial capital of restive Helmand province, Afghanistan. U.S. Army Gen. Curtis Scaparrotti, who also serves as NATO's Supreme Allied Commander in Europe, told the Senate Committee on Armed Services on Thursday that Russia may be giving material support to the Taliban in Afghanistan. Russia dismissed the accusations. File Photo by Watan Yar/EPA

March 24 (UPI) -- U.S. Army Gen. Curtis Scaparrotti, the top U.S. general in Europe, told the Senate Committee on Armed Services that Russia may be giving material support to the Taliban in Afghanistan.

Scaparrotti, who serves as NATO's Supreme Allied Commander in Europe, told the Committee on Thursday that Russia's role in Afghanistan seems to be growing.

Though Scaparrotti did not elaborate on what type of equipment Russia could be sending to the Taliban, he said any type of material support is a significant escalation of Russia's ties with the Tailban.

Scaparrotti said the connection between Russia and the Taliban goes past limited communications, as the Kremlin has said.

"I've seen the influence of Russia of late, increased influence in terms of association and perhaps even supply to the Taliban," Scaparrotti said.

"This does not even merit any reaction, since these statements are fabrications designed to justify the failure of the U.S. military and politicians in the Afghan campaign, we cannot find any other explanation," Kabulov said.

World News // 9 hours ago
London offers all children polio boosters after more virus found in city sewers
Aug. 10 (UPI) -- Health officials in London are offering polio vaccine boosters to all children between the ages of one and nine after more polio virus was found in the city's sewers.

World News // 10 hours ago
Speaker Nancy Pelosi: 'We will not allow China to isolate Taiwan'
Aug. 10 (UPI) -- U.S. House Speaker Nancy Pelosi, D-Calif., said during a Capitol press conference Wednesday that she went to Taiwan during her Asian-Pacific trip to "salute a thriving democracy."

World News // 14 hours ago
French rescuers euthanize Begula whale stuck in river
Aug. 10 (UPI) -- An 1,800-pound Begula whale that got stuck in France's Seine River for more than a week earlier this month has died while being moved back out to sea, officials said Tuesday.

World News // 15 hours ago
French wildfire reignites, forcing thousands to evacuate as 16 homes were destroyed
Aug. 10 (UPI) -- A massive wildfire that reignited in southwest France has forced the evacuation of more than 6,000 people. The fire in the Gironde region burned another 14,826 acres Wednesday.

World News // 16 hours ago
Several dead after new Russian attacks in Ukraine; Zelensky vows to retake Crimea
Aug. 10 (UPI) -- Russia launched new mortar attacks on sites in eastern and southern Ukraine on Wednesday, as Ukrainian President Volodymyr Zelensky vowed to recapture a part of the country seized by Moscow almost a decade ago.