One injured as explosive detonates in IMF's Paris office

The mailed package was addressed to a senior IMF official.

Emergency responders outside the IMF offices in central Paris on Thursday. EPA photo by Ian Langston

March 16 (UPI) -- A woman working at the International Monetary Fund in Paris was injured when a mailed package exploded, burning her face and hands.

A spokesman for the Paris police referred to the device as "a suspicious package with, according to preliminary information, a firework inside." The package was addressed to an unidentified senior IMF official.

The unidentified victim, an executive assistant to the Paris IMF chief, was burned on her face and hands by the explosion, French broadcaster BFMTV reported. BFMTV reported that the device was about one foot long, and that shrapnel hit the ceiling of the office when it exploded. There was no other damage to the building, located in the center of Paris.

The Paris prosecutor's anti-terrorist division opened an investigation, citing attempted assassination, criminal association, explosive destruction, possession and transport of explosive means, all related to a terrorist enterprise. The Anti-Terrorism Branch and the Directorate General of Internal Security are involved in the investigation.

RELATED German mall shut down after 'concrete indications' of attack

An IMF spokesman said the office received threatening telephone messages in recent days but there is no evidence the callers are connected to the incident.

The explosion came a day after a mailed bomb, sent to German Finance Minister Wolfgang Schaeuble in Berlin, was intercepted. A Greek leftist group, the Conspiracy of Fire Cells, took responsibility for the device sent to Berlin, and police have made no connection between the Paris and Berlin mailed explosives.

The IMF is headquartered in Washington, D.C. Christine Lagarde, a French national, has been managing director of the IMF since 2011. The IMF is one of three international organizations that sent loans to the Greek government after it came close to defaulting on its debt in 2010, 2012 and 2015.

World News // 20 hours ago
Greta Thunberg, activists in 70 nations call for urgent action against climate change
Sept. 24 (UPI) -- Fridays for Future, an environmental movement for action to fight climate change, organized rallies in dozens of countries on Friday in the first mass event for the cause since the COVID-19 pandemic began.

World News // 21 hours ago
Lava from La Palma eruption has burned almost 400 structures so far
Sept. 24 (UPI) -- Slow-moving lava from a volcano on La Palma in the Canary Islands has so far destroyed close to 400 structures this week and 500 acres, authorities said in an update Friday. 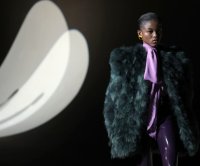