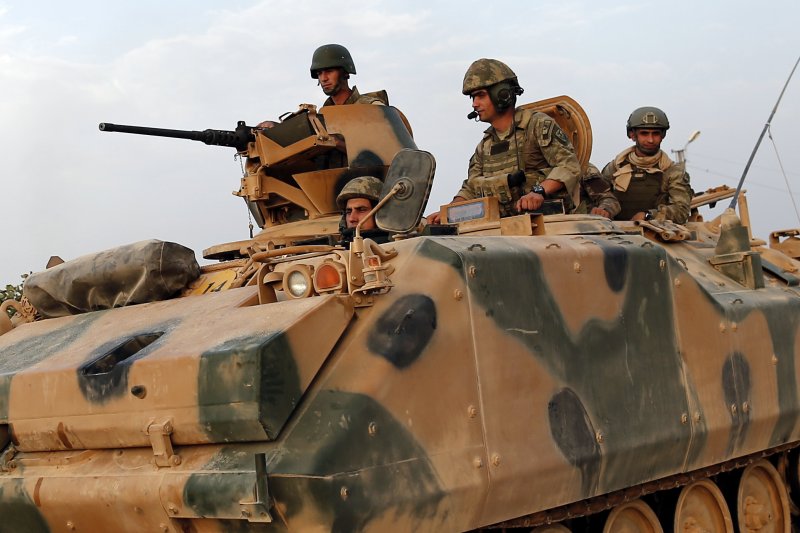 Turkish soldiers return from Syria to Turkey with tanks after a military operation at the Syrian border as part of their offensive against the Islamic State militant group in Syria on August 25. Turkey plans to end its involvement in Syria after the city of Manbij is captured, said Ilnur Cevik, an adviser to Turkish President Recep Tayyip, on Monday. Photo by Sedat Suna/EPA

Feb. 27 (UPI) -- Turkey plans to end its military operation in Syria after the city of Manbij is captured, an adviser to Turkish President Recep Tayyip Erdogan said Monday at a conference in Moscow.

Ilnur Cevik said Turkey is setting up a 56-mile "buffer zone" into Manbij after capturing al-Bab.

"Ankara is trying to regain its presence there," Cevik said. "As soon Manbij is captured, Turkey will stop its operation in Syria."

Cevik appeared at a conference called "Relations between Turkey and Russia: From the Period of Tension to Strengthening Cooperation." It was organized by Sabah newspaper and the Press and Information Office of the Turkish government.

Cevik said he is "grateful" for Russia's efforts.

"[Russian President Vladimir Putin] is providing large support to Turkey," he said. "The Turkish army carried out a very successful operation in al-Bab. Today al-Bab is controlled by the Turkish armed forces ... al-Bab is a town that is very important to us strategically ... I think we would not have been able to conduct a successful operation in al-Bab without Russian support and we are very grateful to Putin and Russia armed forces for the cooperation on that issue."

Cevik said about 85 percent of Manbij and surrounding areas are controlled by the Kurdistan Workers' Party, viewed as a terrorist organization by Turkey.

The Euphrates Shield operation by Turkey and Syrian opposition began on Aug. 24.

World News // 9 hours ago
Hong Kong to hand out 500,000 air tickets to tempt visitors back
Feb. 3 (UPI) -- Hong Kong tourism authorities said Friday they would give away 500,000 free plane tickets and other prizes as part of a global promotion signaling the reopening of the city-state to visitors.

World News // 15 hours ago
Britain to launch public inquiry into 1998 Omagh car bombing
Feb. 3 (UPI) -- The British government will launch an independent investigation into the Omagh car bombing that killed 29 people and injured hundreds more in Northern Ireland in August of 1998.
Advertisement