Kim Rak Kyom has been in charge of missile tests since 2013.

North Korea’s strategic rocket forces commander, Kim Rak Kyom (L), applauds the launch of a Musudan missile in June 2016. Kim was not seen at the most recent missile launch, on Sunday. File Photo by KCNA

Feb. 13 (UPI) -- The commander of North Korea's Strategic Rocket Forces was conspicuously absent on Sunday, when Pyongyang launched what it described as a midrange ballistic missile.

Analyses of footage from Pyongyang's KCTV, images published by state news agency KCNA and Workers' Party newspaper Rodong Sinmun, indicate Kim did not show up at Panghyon airfield, where leader Kim Jong Un was reportedly present to observe the launch.

Kim Rak Kyom was also absent from an event marking the 69th anniversary of North Korea's regular army last Tuesday, which reports to Hwang Pyong So, the political director of the military.

But some analysts in South Korea say Kim Rak Kyom may not have been included in the entourage of 20 military officials because he was preparing a bigger provocation, including an intercontinental ballistic missile test.

The lieutenant general also may have been rebuked for the failure of a midrange Musudan missile test launch, a Seoul official told Yonhap.

Kim has been in charge of North Korea missile tests since 2013, according to the report.

"[The provocations] are a serious military and security threat," the unification ministry spokesman said, according to News 1.

World News // 17 hours ago
World leaders congratulate Biden, who promises repaired alliances
Jan. 20 (UPI) -- Heads of state from across the globe gave their well-wishes to President Joe Biden and Vice President Kamala Harris on Wednesday after they were sworn in at the U.S. Capitol. 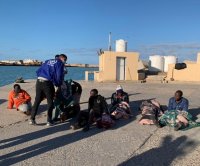 World News // 18 hours ago
Iran, South Korea bank negotiating new account after capture of tanker
Jan. 20 (UPI) -- Iran and South Korea are discussing creating a new bank account for the Iranian Embassy in Korea amid a standoff over a seized tanker.